IT IS A TRADITION THAT COMES FROM THE COLONY

THE PICANA, THE QUEEN OF THE TABLE ON CHRISTMAS EVE

The traditional dish is the main meal on Christmas Eve. 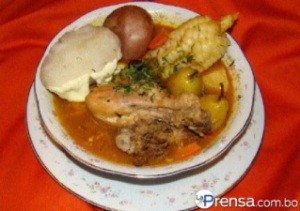 The picana, traditional food inherited from the colonial era, is the Queen of the table on Christmas Eve, says the director of studies of Bolivian Gourmet, chef Victor Laura.

According to the explanations, this dish is typical, mainly in La Paz, Cochabamba and Chuquisaca [Potosi as well]. Each region prepares according to their traditions. Individual differences is, above all, in the absence or increase of some ingredients that change the flavor, such as the use of chicha, beer, [red wine], raisins, lamb, pork, chicken, beef, and others, depending on the taste of the people.

“It is also good to indicate that the elaboration of this meal, Christmas Eve favorite, has direct relation to harvest time because at this time begins the collection of various products, including corn”, said.

Differences. According to Laura, the differences in the use of ingredients are particularly in the type of meat.

Ancestrally, in La Paz were used for beef and lamb meat and not so in the valleys because in these regions were dominated by the use of chicken and pork. Another difference in its preparation, is use of drinks to give it that special touch. In the valleys they resorted to homemade wine or chicha, but more stylized as singani, whisky and beer beverages were used in other regions.

However, the academic Director of Bolivian Gourmet, explained that currently, despite maintaining traditions, can be seen that in the three regions used nearly all the traditional ingredients, the availability of products on the market.

How to prepare the dish. To enjoy a rich picana, this Christmas Eve, the culinary professional tells us that four types of meat can be used for its preparation: chicken, beef, pork and lamb.

In addition to meats are needed at least 25 ingredients for the traditional Christmas dish.

First, cut into six slices the meat and lamb; then chop the carrots, turnips, onions, bell pepper; and then chop the celery and peppermint. In a pot, boil three or four liters of water with salt, to this add the chunks of lamb and chicken as well as carrots and turnips. Meanwhile, in a saucepan, fry in oil the pieces of beef with onions, bell pepper, chopped celery, peppermint, garlic, cumin, coloring or chili, chopped tomatoes, add the meat cube dissolved in boiled water, Fry all for 15 to 20 minutes. All this. move it to the pot with the meats that are boiling, add cinnamon and cloves along with the wine. Cook for 20 to 30 minutes. In another pan cook the potatoes peeled with a pinch of salt, for about 20 minutes. In another pan cook in water with sugar the sweet corn for half an hour.

4 types of meat used for the preparation of the picana, depending on the region: chicken, beef, lamb and pork.