These Vibrant, Futuristic Mansions Are Popping Up in Bolivia

These Vibrant, Futuristic Mansions Are Popping Up in Bolivia

Known as the “King of Andean Architecture,” Freddy Mamani’s colorful designs are changing El Alto and inspiring other architects.

The air is thin in El Alto, a sprawling, dusty, cliff top conurbation of a million people, perched 13,000 feet above sea level. But that’s not the only reason the ramshackle city—which overlooks Bolivia’s de facto capital, La Paz—is taking visitors’ breath away.

Towering edifices of darkened glass, gleaming chrome, and lurid acrylic paneling are rising among the humdrum brick buildings: Think the offspring of a Tyrolean ski chalet and a Transformer. They are usually commissioned by members of Bolivia’s fast-growing, indigenous (Aymara and Quechua) middle classes, who use them for weddings, quinceañeras, and parties of all kinds. Add the epithet traditionally applied to this group, cholo—a racially-charged term, proudly reclaimed by some—and you get the droll label: cholets.

Left: Men are dwarfed by one of Mamani’s emerald buildings.
Right: Buildings that are influenced by Mamani’s style have been popping up in El Alto.PHOTOGRAPH BY NICK BALLÓN 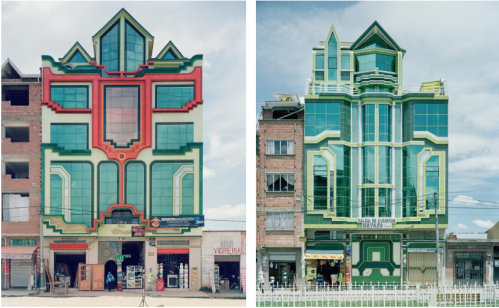 Left: Mamani’s multilevel designs often have shops on the ground floor. Higher levels are often used as party spaces, galleries, and even indoor pools.
Right: Other architects have been influenced by Mamani’s style. PHOTOGRAPH BY NICK BALLÓN

But local architect Freddy Mamani—the most in-demand interpreter of the style—prefers la nueva arquitectura andina–the New Andean Architecture. For, as Mamani explains, his buildings are nothing less than an exuberant act of self-expression by Bolivia’s long-marginalized indigenous majority.

“For me, it’s very important to promote our culture and roots, showing and uphold our identity through architecture,” says Mamani, while supervising craftsmen at the site of his latest creation.

“We’re making an architecture that has a different kind of functionality. Even the paintwork has a different role, it draws on the ruins of [the archaeological site] Tiawanaku. And I apply the colors of the awayos that our mothers carry us in as children,” he adds, referring to the technicolor shawls that serve as multipurpose knapsacks to Bolivia’s famous cholitas. (See stunning portraits of Bolivia’s cholitas.) 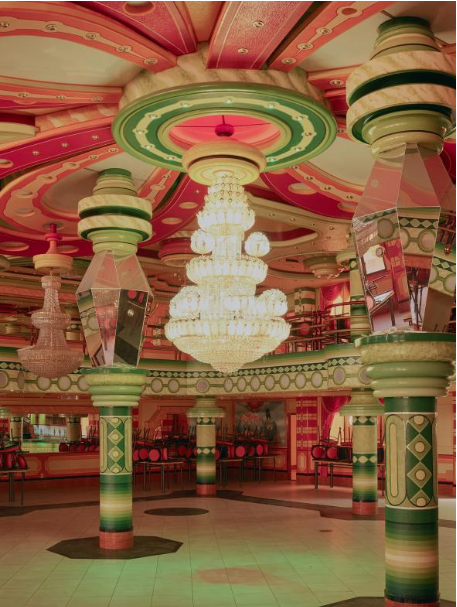 The interiors of Mamani’s buildings were inspired by archaeological sites and traditional textiles. PHOTOGRAPH BY NICK BALLÓN

The work of Mamani and his contemporaries is a bold departure, explains Gastón Gallardo, dean of the Higher University of San Andrés architecture school in La Paz. Rejecting the minimalist and baroque styles preferred by architects trained in the Western tradition, the new Andean architecture marks a “decolonization of the symbolic order.”

But the style is not merely theoretical, nor wholly backward-looking. “We’re seeing modifications that don’t have to do with the ancestral, but rather with the new construction of identity,” Gallardo adds.

By fusing Asian, Andean, and Hollywood influences, the upwardly-mobile residents of El Alto–made rich by mining, international trade, business, and industry–can show their global aspirations. “Building is the physical demonstration of their economic power,” Gallardo says.

Alejandro Chino Quispe, is a case in point. The self-made entrepreneur–who migrated from a rural Andean town to El Alto at an early age–flicks on the lights in his Salon de Eventos Princípe Alexander (one of Mamani’s finest).

Forty ponderous chandeliers, imported from China, flash violet, emerald, and turquoise off a dancefloor of white Spanish marble. The walls and columns are swirled with lime green and orange. The ceiling is liberally flecked with LEDs; an undulating mezzanine is fringed with Andean folkloric motifs.

“This venue, to be sincere, doesn’t have competition,” Chino boasts, with a flash of the golden grill that ornaments his front teeth.

The jarring, beguiling mix of old and new, tradition and modernity, seems uniquely Bolivian. But wherever wealthy Bolivians go, examples of the New Andean architecture are sprouting–Lima, Buenos Aires, and São Paulo, for example. 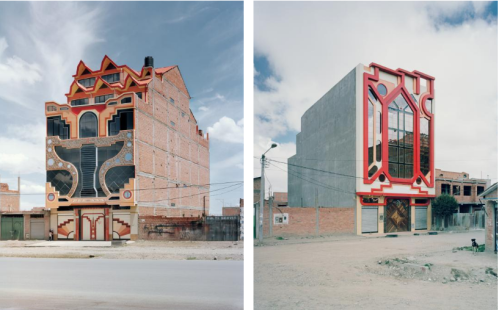 Left: Mamani’s style has influenced other architects in El Alto.
Right: Intricate shapes decorate the facade of one of Mamani’s buildings. PHOTOGRAPH BY NICK BALLÓN 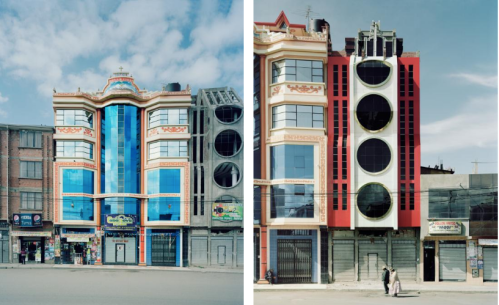 Mamani-esque buildings, constructed by other architects, have been cropping up throughout El Alto. PHOTOGRAPH BY NICK BALLÓN

“We have projects not only all over the country but also abroad,” says Mamani. “I’m working on a project for an exhibition later this year in Paris.” Before long, he predicts, the futuristic towers will be springing up in New York, Miami, and California. The craftsman-turned-architect, like Bolivia, has come a long way.

Laurence Blair is a freelance journalist based between the UK and South America. Follow him on Twitter @LABlair1492.