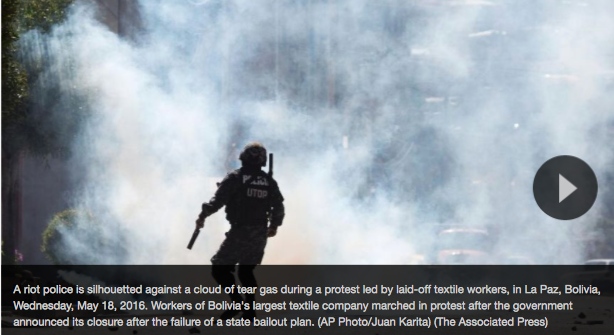 LA PAZ, Bolivia – Anti-riot police and workers clashed in Bolivia’s capital during a protest against the government’s decision to close the country’s largest state-run textile company.

Officials said police fired tear gas at protesters and kept them from seizing a factory Wednesday. Several people were injured, including a protester who lost a hand when a stick of dynamite exploded as he tried to throw it.

More than 5,000 workers joined in the protest led by the COB union, which has been a Morales ally. 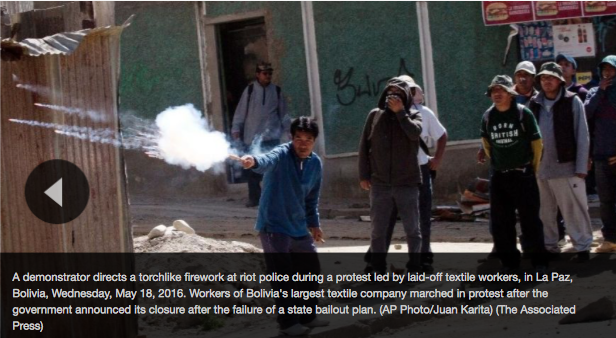 The factory went into crisis after Bolivia lost its U.S. market when Morales expelled the American ambassador in 2008. Morales’ administration bought the factory in 2011 to save it from bankruptcy.

The populist cheap demagogue speech, offering success, has just resulted into bankruptcy and unemployment. The coca grower government has destroyed the best textile company in Bolivia, who exported to the most difficult market in the world.

On top of this disastrous failure, this lousy government, by allowing again the use of dynamite in demonstrations, has resulted in hurting people.

The lift of the use of dynamite came along n preparation for the social groups that this president intends to mobilize to push for his 4th re-election. Which he lost in a referendum last February 21st.