A Bolivian journalist who made headlines when he alleged that Bolivian President Evo Morales had a son whose existence had been unknown until then, now says the child never existed.

Journalist Carlos Valverde reported in February that Mr Morales had a son with Gabriela Zapata, a woman detained over alleged influence peddling.

Mr Morales acknowledged he had had a two-year relationship with Ms Zapata.
But he said that Ms Zapata had told him their son had died shortly after birth.

In the latest twist in the confusing story, Mr Valverde now says that Mr Morales and Ms Zapata never had a child together.

Ms Zapata was working as a senior manager at the firm, CAMC, which had been given lucrative state contracts.

Mr Valverde reported that she had had a relationship with Mr Morales from which a son was born.

Mr Morales, who is not married, acknowledged the relationship, which he said lasted from 2005 to 2007.

The president also said that Ms Zapata had told him she had given birth to his son in 2007 who, she told him, had died shortly after birth.

But Ms Zapata’s aunt, questioned by reporters as she was entering the jail in La Paz where her niece was being held, said the boy was alive and called Fidel Ernesto.

Mr Morales said that if his son was indeed alive he would like to meet him.
When Ms Zapata refused, Mr Morales asked a court to order her to let him see the child within five days. 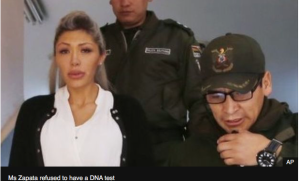 According to Mr Valverde, the child presented to the court was “neither the child of Gabriela Zapata nor that of Evo Morales, and even less so the joint child of the two”.

The journalist also alleges that Ms Zapata “passed the child off as her son”.

Mr Valverde did not give any further details as to where his new information came from but it matches the ruling of the family court judge asked by Mr Morales to investigate the case.

The judge ruled on 6 May that the “physical non-existence of the child” had been proven.

Judge Jacqueline Rada said Ms Zapata had refused to undergo DNA testing or let the child she presented at court as Mr Morales’ son be tested.

Supporters of Mr Morales say Mr Valverde’s allegations in early February hurt the president ahead of a referendum which aimed to change the constitution to allow him to run for another term.

It doesn’t matter how sugar coated can this lousy issue be, by this government, there is one irrefutable fact: there was influence peddling!