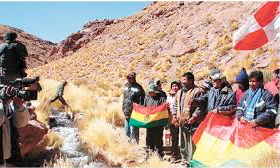 El Dia.- President of the Senate, José Alberto ‘Gringo’ Gonzales, estimated on Tuesday [03/29/2016] that Chile owes Bolivia more than one billion dollars for the consumption of the Silala water. [photo from internet source]

The lawmaker made this calculation based on the book “Chronicle of a dispossession” of the Chilean Cástulo Martinez, who used data from the National Service of Meteorology and Hydrology of Bolivia, on the illegal use of the waters of Silala by Chile .

Gonzales explained that the calculation estimates that the neighboring country consumes each year from Silala [spring] 4,888,080 cubic meters and the figure rises in 92 years (1908-2000) to 499,703,306 cubic meters, at the price of two dollars per cubic meter, the amount of debt is approaching 899 million dollars.

“If you add these (last) 16 years more, we are talking about a figure that far exceeds one billion US dollars, which means that this is the amount that Bolivia never perceived by the use of the waters of Silala” he said .

He also recalled that there was an agreement in principle in 2009, when it was negotiating this issue with Chile, in a commission of deputy foreign ministers. Then “it had been determined that Chile pay and recognize 50% of the debt and the remaining 50% is subject to a study,” he said.