Anapo warns that 2016 will be difficult. 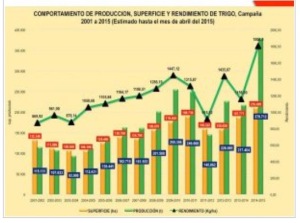 The devaluation of currencies in Argentina and Brazil will severely impact next year in the agricultural sector of the country, which brings together producers of corn, sorghum, wheat and chia.
In addition, the leader of the sector warned that area planted during 2015 will decrease up to 50% on this year. On the other hand, some Bolivian farmers argue that the option is produced with biotechnology, if we want to meet the goal of 1 million hectares per year until 2025.
Meanwhile, the President of the Association of producers of oleaginous and wheat (Anapo), Reinaldo Díaz, said that the farmers will address the 2015-2016 summer campaign with disincentive and uncertainty, projecting that there is a decrease in some crops up to 50% of the hectares planted, as a result of the fall of prices in the internal and international market due to exchange rate policies that were applied by some neighboring countries.
For the President of the Association of producers of corn and sorghum (Promasor), Vicente Gutiérrez, the fall in the prices of corn have been affected up to 50%, down from Bs70 to Bs35 per quintal.