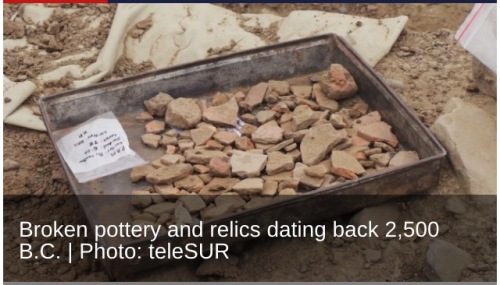 Pieces of pottery have been discovered in La Paz from the time of the famous Tiwanaku civilization that dates back to 2,500 B.C.
A group of Bolivian archaeologists have been camped out in the center of La Paz ever since rare pieces of pottery and ceramics were discovered from thousands of years ago.

They carefully remove fragments from the earth, and then painstakingly tag and mark each piece for the Ministry of Culture.

To members of the general public, the bits of broken pottery may look insignificant, but archaeologists have said they represent a very important find for the country.

“These fragments and other utensils date back to the Tiwanaku people who arrived in this area 2,500 years B.C.,” archaeologist Carlos Lemus, who is part of the team working at the site in the neighborhood of Miraflores in La Paz, told teleSUR.

“We have only just started our work but the artifacts date back to the arrival in La Paz of the first farmers who came from Tiwanaku,” Lemus said.

The famed Tiwanaku culture is an ancient Bolivian civilization located near Lake Titicaca and built 4,000-meters above sea level.

Builders stumbled across the rare pieces of broken pottery from this era during the construction of a new cable car station in the center of La Paz.

Experts said the ceramic pieces of pre-Columbian pottery and utensils were used by a community of Tiwanku members who settled in Miraflores in La Paz.

Such pieces have not been found in an urban setting in Bolivia for years.

“We are still carrying out studies at the site,” said Cesar Dockweiller from Bolivia’s cable car company Mi Teleferico.

But he added that “archaeologists will continue their excavations and anything else that’s found on site will be handed over to the Ministry for Culture.”

“’So far what we have found are pieces of pottery, decorated fragments but most of them are fairly rustic and do not have any type of design,” said archaeologist Viktor Plaza.

Despite this, archaeologists expect to find many more surprises as they progress further with their dig.

No human remains have yet been found, but archaeologists aren’t ruling out finding skeletons.

The scientists hope the rare objects will shed new light on the customs and practices of Tiwanaku, one of Bolivia’s most ancient civilizations.