With new discovery, Bolivia has most dinosaur footprints on earth

With new discovery, Bolivia has most dinosaur footprints on earth 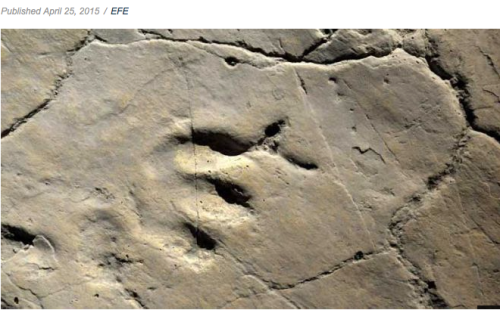 LA PAZ, BOLIVIA – Bolivia has become the country with the greatest number of dinosaur footprints in the world, following the discovery of 5,000 new ones, including those of two new species, in the Cal Orcko outcrop near Sucre, an area already known to have 5,000 tracks of this kind.

The director of Cretaceous Park on the site, Elizabeth Baldivieso, told Efe on Friday that the new discovery was made over the past 10 days by a team of experts headed by Swiss paleontologist Christian Meyer, director of the Natural History Museum of Basel.

Meyer came to Bolivia to check out new areas of the outcrop opened up by quarrying works.

The outcrop, 110 meters (360 feet) high and 1.5 kilometers (almost 1 mile) wide with a 75-degree gradient, was already famous for the 5,022 dinosaur tracks that have been registered since 2006, but the works of a limestone quarry near the paleontological site have brought to light another 5,000 footprints, Baldivieso said.

The researchers have now found footprints of several species, including two that were previously unknown, and which will be named after Sucre and Cal Orcko.

Baldivieso said that Meyer prepared a preliminary report of the find and that in three months he will publish the complete results, which will then be used to prepare the Cal Orcko application for recognition as a UNESCO world heritage site.

“We already had the largest site in the world with the original 5,022 footprints, now we have many more by far than any other site. More than 10,000 tracks have been found and we’re still waiting for the final report,” Baldivieso said.

The Swiss expert went to Sucre on Friday, predicting that the unknown species could be an ankylosaur and a theropod, which would become known as “Calorko saurupis sucrense” and “Sucre saurupis bolivienses,” respectively, according to the daily La Razon.

“What is most important is that Cal Orcko is the largest site anywhere in the world, there’s no other site with more than 10,000 dinosaur tracks, it’s a record on the planet, it’s fantastic,” Meyer told the media.

The company that quarries limestone to produce cement has finished its work, so Cretaceous Park is assured of having for its study the newly opened areas of the outcrop, located 6 kilometers (3 3/4 miles) from Sucre.

The various species that inhabited the area lived around 65 million years ago, according to Cretaceous Park, which is visited by some 150,000 people a year.