This news dropped like a bomb in Bolivia, not only does it embarrasses us but deserves clear, transparent reply and/or action from the Bolivian government. I’m not asking nor will I be impressed by the typical rhetoric current government officials’ style has accustomed us to. But I demand to know the truth!!

An update info at 15:26 hours today is included at the bottom, thank you. 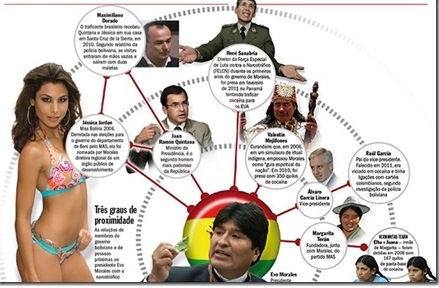 This is how the report looks like in the magazine, and below the link of the original Portuguese article from Edson Sombra:

The article by Duda Teixeira:

Police report reveals the encounter of a Brazilian drug trafficker with the number two of the Bolivian Government.

The Bolivia President, Evo Morales is proud to encourage the plantations of coca, the raw material for more than half of the cocaine and crack cocaine consumed in Brazil, under the argument that its leaves are used to produce tea and traditional medicines. However, it is estimated by the Organization of the United Nations (UN), only one-third of the coca planted in that country meets this demand. The rest supplies drug trafficking, and as a consequence, contributes to corrupt the lives of nearly one million Brazilians and their families. Recently there have been evidence of the complicity of the Bolivian Government with drug trafficking goes beyond a simple defense of the interests of the growers or coca planters.

Veja had access to reports produced by an intelligence unit of the Bolivian police, who reveals among other events, a direct connection between the man of trust of Evo Morales, Minister of the Presidency Juan Ramón Quintana, and a Brazilian drug trafficker who is currently serving his sentence in the prison’s maximum-security Catanduvas, Paraná.

One of the documents, entitled International fugitive apprehension and signed with the disguised name “Carlos”, describes how Bolivian officials identified the House of the Brazilian Maximilian Dorado Munhoz Filho in 2010. Max, as well as known and his band possessed estates in Guajará-Mirim and eight cities of Rondonia, where collected the drug released from Bolivian aircraft. The Max bandwidth monthly, receives about 500 kilos of cocaine which were then transported to San Paulo and Rio de Janeiro. Drug trafficker fled the chain Urso Branco to Rondônia in 2001, and then suspected he was hiding in Bolivia. In fact, he had a property in Chiribital Street, corner with Pachiuba, a noble neighborhood of Santa Cruz de la Sierra. November 18, 2010 at 2 pm, police officers who watched the building witnessed an extravagant dinner. Quintana, today the second most powerful man in the Republic, appeared in the company of Jessica Jordan 28 years, famous in his country for having been elected Miss Bolivia just 4 years earlier. Both had by then, official positions of trust in government agencies.

Quintana was the director of the Agency for the development of the Macro-regions and border areas. Two months earlier, Jessica was named after Vice President Álvaro García Linera as Regional Director of development of the State of the Beni Department that shares borders with Rondonia and where much of the Bolivian drug enters Brazil. Quintana and Jessica entered the House of Max with empty hands and came out 20 minutes later with two briefcases. The content of them is unknown.

Two months after the meeting with members of the Morales Government, Max was arrested in a joint operation of the Brazilian federal police and a group of members chosen at finger of Bolivian intelligence led to the Brazil. On the other hand, Quintana was appointed by Evo Morales , the following year as Minister of the Presidency, the equivalent to the Brazilian Civil House, since he had already occupied the 2006 to 2009. The story of agent Carlos about the meeting between the members of the Government and the Brazilian drug trafficker are part of a series of documents filtered to the press Bolivian and American by a political movement to Socialism (MAS) party of Morales. To the author of such delivery of information, the Government has not met its promise to improve the lives of the poor, or Bolivia Indians. Evo Morales won two presidential elections promoting his candidacy as a defender of indigenous. However, the majority of them are dissatisfied.

Since Morales took the Presidency there was an increase of 22% of the surface dedicated to the cultivation of coca in the country. Unlike Colombia, which in the 1980s cultivated and refined 90 percent of the cocaine consumed in the world and now is fighting the cartels and reduces its production; Bolivia and Peru have increased their participation in that market today, they provide half of drugs derived from coca leaves. Factories of cocaine so far did not exist in Bolivia, began to appear by hundreds, and today operating in the country Colombian, Mexican cartels and the Brazilian PCC. To see the growth of organized crime and politics doors closed to their representatives, indigenous people and trade unionists have become openly criticizing Morales. Last month, police declared on strike demanding better wages. Two weeks ago, a new indigenous March arrived in La Paz to prevent the construction of a road in the indigenous ecological park Isiboro Secure (TIPNIS). The project that unites “two towns without inhabitants”, according to the Bolivian people, aims to open new frontiers for the planting of coca, since the productivity of the neighbouring region of Chapare, main stronghold of Morales where 90% of the leaves are destined for the production of illegal drugs, is in decline. Quintana doesn’t get tired of attacking Indians opposed to the construction of the highway, at the same time that comes out to defend the coca growers. Quintana was military, trained by Americans and Adviser to the Minister of defense of President Hugo Banzer (1997-2001). In addition, he is author of the Morales Government’s most anti-American statements. He is credited the suggestion, obeyed by Morales to expel agents of the Drug Enforcement Administration (DEA), American body that funded the gasoline and part of the salary of the Bolivian police officers dedicated to the fight against drug trafficking in the country. It is not surprising that such a measure has left the head of the man who shares the responsibility of managing the relationships of the Bolivian Government with the Venezuelan President Hugo Chávez with [Bolivian] Vice President Álvaro García Linera. [NAS is also going to leave on September 2012]

Reports that reveal the compromising ties of the Bolivian Government with drug traffickers were conducted by agents who sympathize with the Morales administration, surprised at the inability of the President of perceiving the rot in his environment. “The efforts that our friend and brother Evo to eradicate corruption fall on deaf ears and that can be used by the opposition to smear his honor” explains a police undercover, nicknamed Confucio. One of the mentioned documents reveals that Raúl García, father of Vice President Linera and addicted to cocaine, would have influenced the appointment of the Director of customs of the Viru Viru airport in Santa Cruz de la Sierra, where much of the drug with destination comes out to Brazil. “Some Colombian drug traffickers that secure giving him an apartment in Santa Cruz to the father of the Vice President in exchange for protection so that it breaks off certain aircraft, say they have evidence of this” says one of the confidential reports. It should be noted that Raul Garcia died of a heart attack last year.

“The growing performance of Brazilian traffickers in Bolivia is provided by a number of factors, which include the possibility of negotiating with members of the Government” said Douglas Farah, American specialist in the study of the illegal flow of arms and drugs, which has analyzed all the confidential documents handed over by the political of the more. So far there is no data that will help to clarify if the environment of Evo Morales has corrupted in isolation or if he would have direct involvement in his Government with the drug trafficking business. So far the President has not recognized that anything running improper or illegal. Since the opposition took delivery of these compromising documents so far, no investigation has been opened by the authorities. Instead, he tried to punish the messengers. Senator Roger Pinto, for example, that in March 2011 had the audacity to take a copy of the report on the meeting between Quintana and Max, among other roles with complaints, to the Palacio Quemado was accused of corruption by Morales and [Pinto] just received political asylum in the Embassy of Brazil in La Paz. Until last Friday, he had not received the safe-conduct from the Bolivian Government to be able to board a plane bound for Brazil.

The Spanish version of the article: http://noticiasvenezuela.org/?p=47604

Two opposition legislators have ratified today, they submitted documents in 2011 to the President Evo Morales that links with drug trafficking the two senior government officials cited by the Brazilian press.

Senator Bernard Gutierrez told radio Pio XII, he and his colleague Roger Pinto delivered “personally” to Morales in April 2011 documents received by his party and “they refer” to data published by the Veja Brazilian magazine.

According to the publication, of conservative tendency, the Minister of the Presidency, Juan Ramón Quintana, and the delegate of the Agency for the development of macro-regions border, Jessica Jordan, were related to the Brazilian drug trafficker Maximiliano Dorado Munhoz Filho.

Gutierrez said to radio PiO XII that President Morales “has that information.” “We have have delivered in a sealed envelope, and he has done absolutely nothing.”

Gutierrez said that the documentation his party received, came from the Ministry of Government although “in the magazine Veja, they say that someone of their own party [MAS] has been the one who leaked that information”.

In any case, asked Morales that “if not going to do anything with the information he has received” return to those who surrendered it “because it’s the only copy of documentation that we had”.

In March 2011, Roger Pinto revealed the existence of a report that linked the “environment” of the representative with the general of police René Sanabria, former Chief anti-drug, captured in January 2011 in Panama and remains in United States, convicted of drug trafficking.

Sanabria wrote last May to some local media reported that “there are officials” from the Government “involved in drug trafficking”, but the Minister of Government, Carlos Romero, described the complaint as a “vendetta”.

I think these are serious accusations that permeate the whole political party in power. The Bolivian society demands to know the truth and asks for punishment to those involved. Bolivia certainly deserves better!

Furthermore, current Bolivian president just got re-elected as head of the coca growers of the Chapare, he  will continue to act in that capacity as well as president of Bolivia, so he has to come clean, this news term carries him well over the electoral year. So he must instruct to find out what is happening and punish the guilty parties, whoever they are!