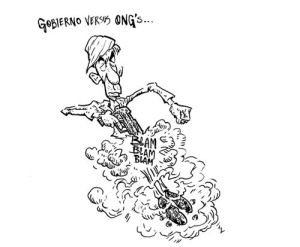 We see in the cartoon by El Dia, January 11, 2012, current vice-president’s doing his best… shooting himself on the foot!! The title above reads: “Government versus NGOs…”

Current vice-president published recently a “book,” well not a book under international standards, it is a Bolivian one, his’ is less than 170 pages…

In any case in that “book,” he attempts a very simple analysis to attack some of his former political allies and also some of the NGOs which he was also part of. There is a very long document by former INRA rep who is also counterattacking the vice-president’s conclusions in said ‘book.”

El Dia captured in this cartoon all that useless and nonsense “lefty” rhetoric, enjoy!