Evo Morales is running around as a Jedi in a bid to stay in power. 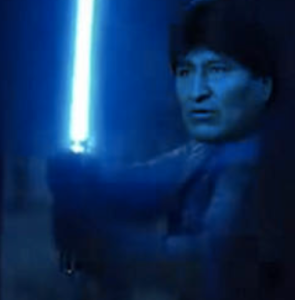 When you’re changing the constitution to stay in power, why not tap The Force? That seems to be the thinking behind a bizarre new campaign video that casts Bolivia’s populist president, Evo Morales, as a Jedi hero dashing through segments of the latest Star Wars smash, The Force Awakens.

The two-minute video, whose title in Spanish is Bolivia Wars: the Awakening of Yes, shows Morales doffing a Stormtrooper helmet and posing with a cowl and light saber. Other scenes include random scenes from the new Star Wars movie as well as a shot of chaos in a South American street.

The video is posted on the official Facebook page of a political campaign that supports a referendum to keep Morales in power until 2025. It appears designed to persuade Bolivian voters that a “Yes” vote in February is needed to prevent their country from falling to the forces of darkness.

You sort of need to watch the video to get the full flavor, but here is a screenshot of Morales disguised as a Stormtrooper:

And here are the credits:

The Facebook page hosting the video is titled “Si, Bolivia.” A translated version of the page describes the video as follows:

Starring: you, he, she, all of us that we are fighting against the empire and we’re looking for a better future. Join the positive force of force, next to the .
Tell him to the dark side of the past, the delay, poverty, and the evil.

The Bolivian referendum, which is set for February, came about after Bolivian lawmakers voted to change the constitution to allow the country’s President to serve an additional term. Morales, who is Bolivia’s first indigenous President, came to power in 2006 during a period when a wave of left-wing leaders were elected in South American.

This individual pretty much resembles the Dictator, does as he pleases and responds to no one. He managed to waste over $150 billion dollars and now that there is a decline in the price of our commodities he got a $7 billion loan from China… while public corruption, narcotraffiking, lynching, smuggling have sprouted inside an anarchical plurimulti nightmare!

Over 700 Bolivians had to flee the country die to political persecution, he controls all State powers, like a dictator.

When the coca grower leader authorized to use the images and icon of Star Wars, he did not care about property rights, he could care less… his delusions of grandeur rule his life and only portrays a true ochlocrat, he knows nothing about being a good leader, he is not a public servant, he only cares to continue to use power for his own sickening ego. 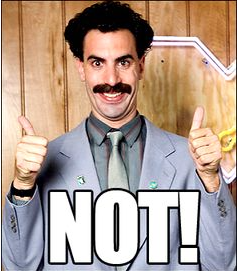 Thus, we need to stop this nonsense, this embarrassment and make sure we all vote NO in February.

The NO has to be overwhelming so this egomaniac does not have the slight chance to commit fraud.

We must rebuild our nation!