On the first day, 11 concerts were held at the headquarters of the Chiquitania and in the capital of Santa Cruz. 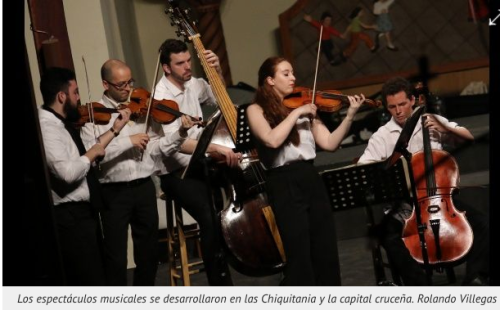 The XII version of the Misiones de Chiquitos Music Festival was launched with 11 concerts in nine of the venues. The Choir and the Orchestra of San Javier and the German School Schulspatzen were in charge of opening the presentations in Chiquitos, while the Tarija Philharmonic Orchestra made the world premiere of the 16th Pedro Ximénez and Julliard 415 symphony and the Urubichá Choir closed with a golden clasp in the capital of Santa Cruz.

In the case of Santa Cruz de la Sierra, there are seven galleries and cultural centers that have proposals for the 10 days of the festival: the House of Culture Raúl Otero Reiche, the Center for Plurinational Culture (CCP), the Manzana 1, the Centro Boliviano Americano (CBA), Casa Melchor Pinto, Café Patrimonial, Alianza Francesa and Goethe Zentrum.

In San Ignacio de Velasco there are programmed activities every day of the festival, the most important will take place on the 22nd, when the Baroque concert takes place, which will be followed later by the staging of the play The Mission and will end with a retreat .

In the same way in San Rafael there will be guided tours to the Chiquitanos temples, to the missionary chapter and the sale of the typical baked goods of this region has been organized.

While in Concepción different theater plays will be presented during the days of the festival; In addition, you can visit the workshop of Samuel Cruz, artisan luthier.

In San José this Friday the festival begins with a guided tour of the Santa Cruz La Vieja park and a photographic exhibition in tribute to the 25th anniversary of the declaration of Unesco’s Heritage.