BOLIVIA: DEFENDERS AT RISK BY ACCUSATIONS AND THREATS FROM AUTHORITIES 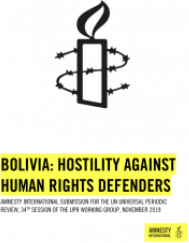 The highest government authorities in Bolivia, including President Evo Morales and his government minister, Carlos Romero, have publicly accused and threatened human rights defenders and organizations critical of their policies, demonizing them and hampering their important work, says Amnesty International in a new report published today.

The report Bolivia: Hostility against human rights defenders, submitted in the context of Bolivia’s Universal Periodic Review before the United Nations, exposes the intimidating and stigmatizing tactics used against human rights defenders and the ensuing situation of risk and censure in the country, at a time when President Evo Morales is seeking a fourth term in office.

This report also includes Amnesty International’s other primary concerns regarding the human rights situation in Bolivia, in the context of the Universal Periodic Review to which the country will be subjected by the UN Human Rights Council in November of this year.

Notable among these are the call upon the Bolivian authorities to guarantee Indigenous Peoples their right to consultation regarding projects that may affect them, and the call to strengthen the capacities of the Truth Commission so that it is able to make progress in its investigations into crimes under international law committed during the military dictatorships (1964-1982) and bring those suspected of criminal responsibility to justice.

Amnesty International has also launched an international campaign to ensure that those who devote their lives to defending human rights in Bolivia can do so without fear of reprisal in a free and safe space. This campaign is being implemented in coalition with the following Bolivian human rights organizations: the Centro de Documentación e Información de Bolivia (CEDIB), the Asamblea Permanente de Derechos Humanos (APDH) and the Coordinadora Nacional de Defensa de Territorios Indígenas, Campesinos y Áreas Protegidas (CONTIOCAP).