Nicholas Gill reports for The Guardian:

Chefs among travelers proving there is demand for produce from Madidi – and helping communities understand commercial potential of their flora and fauna. 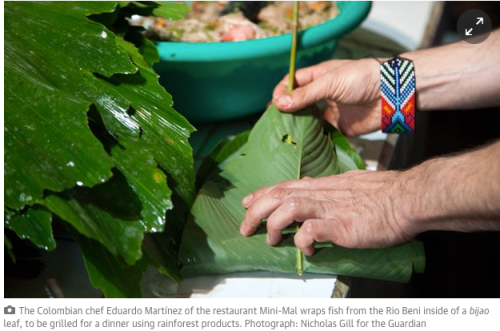 Deep in Bolivia’s Madidi national park, Kamilla Seidler – the head chef of the Gustu restaurant in La Paz – was looking at a basket of cusí, the fruit of the babassu palm. An oil processed from the seeds is already marketed as a hair and skin product, but Seidler suspected it could have culinary potential, too.

“Bring me three kilos of it and in a month I can tell you all kinds of things you can do with it,” she told Agustina Aponte, who was representing a group of women from Yaguarú, one of 31 campesino and indigenous communities living within Madidi’s 1.89m hectares.

While the Bolivian government is pushing to open its protected areas to oil and gas firms, the women had come to participate in an initiative to exploit the park’s natural resources in a more sustainable – and appetizing – way.

Chefs from across Latin America, scientists from the Wildlife Conservation Society, and staff from Bolivia’s environment ministry and the Danish International Development Agency had also travelled to the park to discuss sustainable rainforest products.

The meeting was intended to prove that there is demand among leading chefs for forest produce such as wild cacao or oreja de mono mushrooms – but also to help native communities understand just how much commercial potential there is in the flora and fauna they come across on a daily basis. 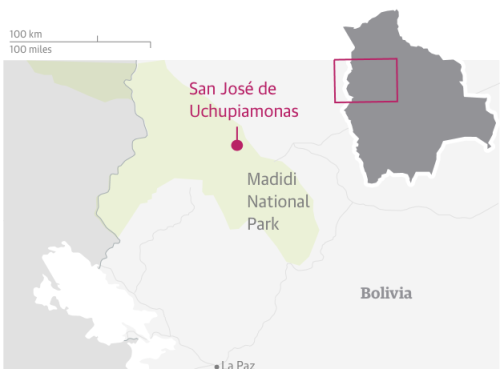 “The first thing we have to do is document the biodiversity. To understand what is there,” said Rob Wallace, of the Wildlife Conservation Society (WCS), who has been exploring the protected area for the past 17 years.

Wallace and his team have catalogued more plant and animal species in Madidi than any other national park in the world, identifying those that are edible with the help of native guides.

Out of the forest came camu camu (a cherry-sized fruit with 30 times the vitamin C of an orange) and majo (another palm fruit that can be pressed to produce a milk, which could offer an alternative for the lactose intolerant). There was rare wild cacao and the honey from stingless bees. Some arrived in carefully labelled boxes, others in old Coca-Cola bottles. 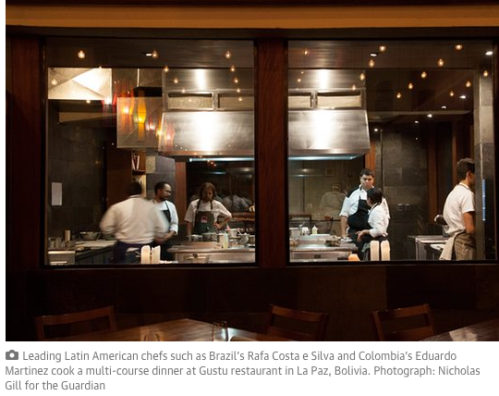 “In our experience, it’s difficult to connect with the product,” Seidler told the indigenous women. “There’s a market, but we need the connection. Together we can work on the quality.”

The Peruvian chef Pedro Miguel Schiaffino, part of a Rainforest to Table organization that includes Seidler, spoke about ají negro, a spicy yuca reduction that he encountered in Pucaurquillo, a Bora-Huitoto village in the Peruvian Amazon.

In 2015, his Lima restaurants and kitchens of two Amazon river cruise ships he runs purchased 40,000 Peruvian soles of it, completely changing the economy of the village while giving value to their culture. There is hope that a similar model could work in Madidi too.

The expedition was spearheaded by the team behind Gustu, the La Paz restaurant launched in 2013 by Claus Meyer, the Danish co-founder of Noma, three times voted the best restaurant in the world.

Since then, Meyer’s Melting Pot organization has grown into an engine for sustainable culinary development, helping open a dozen small cafeterias and cooking schools in impoverished neighbourhoods and creating a logistics network to connect artisanal producers with chefs and consumers.

Yet connecting with Bolivia’s isolated and undeveloped Amazonian regions, which make up nearly half of the country’s territory, has been a challenge. In urban centres such as La Paz and Santa Cruz, few know native fruits such as açaí or that the world’s largest production of castañas, aka Brazil nuts, is actually in Bolivia.

When Seidler first arrived in Bolivia from her native Denmark in 2012, she went to dinner at the home of Kenzo Hirose, one of the restaurant’s chefs, who comes from a jungle village on the Rio Beni. She encountered fruits and fish she had never seen. “[But] where are these products in the markets of La Paz?” she asked.

The visitors’ most significant achievement has been establishing a relationship with a group of Tacana hunters who harvest caimans for three weeks each year according to quotas based on population surveys managed by the WCS. The skins are sold to Gucci, and the tail meat is sold to Gustu. Despite growing demand, bureaucracy has kept other hunters from coming forward, requiring a six-day journey to La Paz for permission, and more restaurants from obtaining licenses to sell the meat.

“Formalization and consistency can often make bringing products to a market impossible,” Jacob Olander, who manages Canopy Bridge, a global network that connects suppliers and buyers of wild-harvested products, told the group. “Restaurants can offer to be an interesting intermediary.”

Near the end of the trip, Seidler mentioned that for years she had heard tales of a wild vanilla from Madidi, but had never seen it. “Everyone keeps telling me it’s as big as a banana,” she said.

The next day a guide from Chalalan found three pods growing near the lodge. They were as big as bananas.

I just hope the populists in government cease their stupid idea to build a dam in El Bala, that would destroy the wonderful biodiversity of the Madidi National Park and its surrounding!