After reading about Jim’s life and of his family I could only admire him. I had also experienced similar feelings when I am in the USA, both our societies hold similar values, ethics and love to our families … my respect to Jim Shultz! In times when we had a Trump, an evo, both with all that cheap demagogue and hatred … Jim’s life can only bring us hope in human coexistence. The above is the opinion of Bolivian Thoughts. 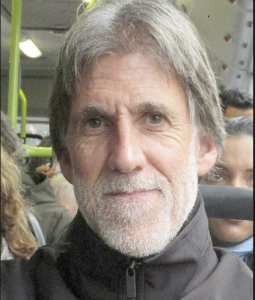 TIQUIPAYA, Bolivia — For many of you I may as well be on another planet. The road outside our front gate is made of rocks and dirt, with sudden deep ditches that make me long for the gentle potholes of High Street as I travel around on my filthy red bicycle. Our neighbors here do not drive pick-ups or any other vehicle available new or used from West Herr. They walk where they need to go, even if it is far, or they take one of the old buses that look like a worn-out U.S. school bus repainted in faded reds and blues.

Our nearest neighbors, Fructoso and his family, begin their days early moving their small herd of cows in search of something green to eat. Green is hard to find here in winter. The last rains were in April and we aren’t likely to see any more until October. That’s our rush hour here. You race to try to get your daughter to school on time and you get caught behind slow-moving cows. It’s the local version of getting caught at the long traffic light at Lincoln and Locust.

My wife Lynn and I first came to this strange and magical place, the valley of Cochabamba, as newlyweds in 1991. We were two young people with backpacks, who came to be volunteers for a year in a Bolivian orphanage. We had no idea at the time that a fierce little five-year-old girl would come home to California with us a year later as our daughter. We didn’t know that we would end up with three Bolivian children, move back to Bolivia from California in 1998 for what was supposed to be a year, and stay for almost twenty. We also didn’t know that the fierce little five-year-old girl would one day grow-up and go to college in the U.S., get a job at the GM plant in Lockport, meet a guy named Mike at Applebee’s one night, and pull us with her to Niagara County. Life unfolds in funny ways, no?

Now we are here for five weeks for the surreal experience of unraveling a life that took two decades to build. Our days are filled with a bittersweet mixture of sorting our things into piles of: toss, give-away, and try-to-sell. We lived here in a paradise of tall trees, a funky house, and a pair of pet bunnies who have run of the place. Now we show our paradise to potential buyers. All things have their season and ours in Bolivia came to its end a year ago when we moved to Lockport and stayed.

But beneath the surface of dusty roads, our conversations held in Spanish, and the fields planted with alfalfa – how different really are the small towns of Tiquipaya and Lockport? Last weekend our neighborhood held its annual festival for the Virgin del Carmen, the local tribute to the Virgin Mary (who in Latin American Catholicism ranks about equal with Jesus). Our neighbors danced their traditional Bolivian dances, twirling in skirts of bright yellows, reds and greens. They bought plates of traditional foods – such as pique macho, a platter of cubed beef mixed with French fries, tomatoes and onions. Neighbors traded gossip with neighbors.

Is that really so different than Lockport’s parade for the Fourth of July down Main Street?

We live in a time in which the focus seems to be on how different we all are and how we need to keep our cultures in-tact against the invasion of foreign people and ways. I have lived now for two decades straddling two worlds as different as they come, theoretically – rural Bolivia and the USA. As it turns out our similarities are actually greater than our differences.

When Lynn and I ran into our neighbor here the first day back, a man most at home in the seat of an ancient tractor plowing fields, the first news he shared was his sadness at being distanced by his daughter from his six-year-old grandson who he loves. I have had the exact same conversation recently with grandparent friends of mine in Berkeley and Brooklyn. In Tiquipaya as in Lockport I am surrounded by neighbors who fix things for themselves, who join together as community to help when people are in trouble, and who don’t have much patience for impractical ideas. How different are we really?

During a lecture I gave here a couple of years ago to a group of visiting U.S. students one of them asked me how living in Bolivia for so many years had changed me. After some reflection I admitted that I had developed the habit of talking to dogs. That’s because there are so many in the streets here and because I see the same ones every day it just seemed rude not to say hello. This is a habit that gets me in trouble sometimes in the U.S., I admit.

But of course I have been changed in more significant ways as well. I appreciate the humble grace of those who live with very little and that our endless effort to own more things is not a road to happiness, despite all the advertising in the U.S. that tells us otherwise.

We will not live here again, but we will always return. I am an American by birth, by citizenship, and by manner, and always will be. But I have another country here as well that also holds a piece of me, and I am extraordinarily lucky for it.

Jim Shultz, founder and executive director of The Democracy Center, lives in Lockport and is, at the moment, once again a Gringo in Bolivia. He can be reached by email at: jimshultz@democracyctr.org.