The new image of evo’s “egocentric regime” in Europe

The new image of Evo in Europe

European parliamentarians did not discover any novelties for Bolivian eyes, although their findings certainly contributed to the collapse of the romantic image that a good part of Europe made of the first Indian to govern Bolivia.

The members of the subcommittee left a diplomatic report on Bolivia, but two of them spoke strongly to the European Parliament.

“There is a risk of democratic involution, of turning to an autocratic situation,” said the deputy Francisco Assis, who added that “the principle of separation of powers is being injured. That makes the opposition being persecuted.”

Meanwhile, his colleague Christian dan Preda at all times referred to the Bolivian government as a “regime” and was not surprised that the Government had “difficulty to understand our approach to the defense of human rights.”

Perhaps that is the central point, the lack of understanding on the part of the Bolivian Government on the importance of defending, promoting and preserving human rights and democratic principles.

Otherwise it can not be explained that it has annulled the initiative of the Ombudsman’s Office, that it tried to take over the Permanent Assembly of Human Rights and that it refuses to extend the permanence of the High Commissioner of Human Rights of the UN.

For a better understanding of the matter, former Foreign Minister David Choquehuanca indicated in an interview with Pagina Siete that the country no longer needs human rights offices, which should direct their actions to other countries, where human rights are violated.

Evo Morales, from that emblematic tour in which he was known by the striped sweater, and as virtual president of Bolivia, gained the respect and the consideration of the majority of the European governments, that not only did not question his acts, but who did what they could to cooperate with the new management.

However, this halo that has covered the Bolivian leader, as defender of the indigenous and Mother Earth, has begun to yield ground to give way to the image of the ruler who resists the alternations in power, who refuses to give way to new generations, which does not admit of dissent, suffocation of the media, which pushes back civil society organizations and, as if that were not enough, does not believe that it is necessary to have human rights offices in his territory.

This cartoon depicts clearly the mind of this “president”, it is from El Deber, April 14, 2016. Portrays the egocentric coca grower caudillo saying: “aren’t you interested in becoming Ombudsman?” 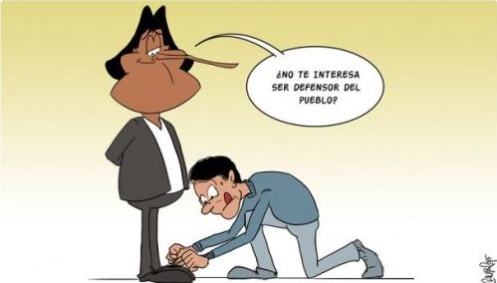