Environmental platforms formed a Chiquitano Dry Forest Defense Coordinator as they were not heard by national, departmental and municipal authorities

Given the Government’s refusal to issue the national disaster declaration, the indigenous peoples of affected populations will start a march on Monday, September 16 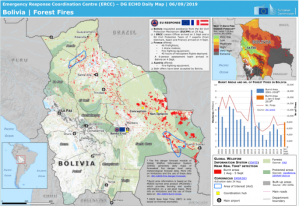 Different environmental platforms formed a Chiquitano Dry Forest Defense Coordinator, as they were not being heard by national, departmental and municipal authorities. They will take to the streets in defense of forested areas in eastern Bolivia threatened by forest fires.

Alejandra Crespo, member of the Committee in Defense of the Forests of Bolivia, anticipated that the demand in defense of the flora will be in the streets with different peaceful activities.

“The only changes that occur in this country are through the mobilizations that citizens activate, we have already demonstrated it with the water war, the gas war, and we believe that it is time for the war to come to our forests, unfortunately we have to reach that situation that the citizens do not like, but we see no other option in the face of the ineffectiveness and indifference of the national, departmental and municipal authorities and also the civilians themselves, so we declare ourselves in emergency,” she said.

In addition, this group of environmentalists asks the Government to review the promulgated regulations that give rise to strengthening extractive activities in forested areas.

Given the Government’s refusal to issue the national disaster declaration due to the forest fires that affect eastern Bolivia, the indigenous peoples, settled in the affected populations, will start the tenth march in defense of land and territory next Monday, September 16.

The mobilization will depart from the municipality of San Ignacio de Velasco, will travel through several small towns until they reach the capital of Santa Cruz, in case of not having an answer then the march will move to La Paz, according to a Fides Santa Cruz radio report.

Beatriz Tapanache, a great Chiquitania chieftain, said that the natives will also add to the request to annul the Supreme Decree that authorized the controlled burning enacted on July 9.