RIVERSIDE, Calif. (www.ucr.edu) — Jar Jar Binks and Gollum: Two characters hailing from entirely disparate cinematic universes, yet linked in perpetuity by the same groundbreaking tool that brought them to life in “Star Wars: Episode I – The Phantom Menace” and the “The Lord of the Rings” film series, respectively.

It’s called motion-capture technology, and it’s often used to record the movements of people or objects as a means of creating life-like animations, such as the ones famously seen in director Peter Jackson’s adaptations of J.R.R. Tolkien’s classic novels.

But for Sara Becker, an assistant professor of anthropology at the University of California, Riverside, motion-capture’s practical applications extend far beyond entertainment.

Becker is a bioarchaeologist whose research concentrates on the ancient labor practices of pre-Columbian civilizations such as the Tiwanaku, who lived in Bolivia’s highlands about 1,000 years before the Inca.

She studies human skeletal remains to decipher how evidence of things like changes in where muscles attach to bones and patterns of osteoarthritis might indicate how prehistoric communities performed and shared different types of labor.

“We lack a complete understanding of what people were doing in the Andes in prehistory,” Becker explained. “We have a modern idea of what was going on during the Inca Empire because we have the work of Spanish and Native chroniclers, but we don’t have many great ideas about the period 1,000 years earlier — when the Tiwanaku were living — because there’s no written language from that time.”

Although she primarily looks at what people were doing in the past, a recent grant from the National Geographic Society will allow Becker to train her sights on the Tiwanaku’s likely modern-day descendants, the Andean Aymara people. Native to South America’s Altiplano plateau, the Aymara primarily live in Bolivia, Peru, and Chile, where their combined numbers are estimated to total more than 1 million people.

“Many Aymara are what we consider ‘traditional laborers,’” Becker said. “They still make pottery and stone tools, weave, farm, grind corn, herd llamas, and do a range of other tasks that require a significant amount of labor.”

In an effort to chronicle those activities and the people who do them, Becker will travel to Bolivia intermittently over the next year armed with motion-capture equipment from leading purveyor OptiTrack. Using the technology to capture the movements of between 50 and 100 artisans and other laborers, she noted, will give her a clearer picture of the physical mechanics behind tasks that have been practiced for thousands of years.

“I’m hoping to see how the people I capture are moving their bodies, where they’re repeatedly moving, which muscles are involved in their movements, and how much force is required of those movements,” Becker explained.

The goal is to discern how certain patterns of movement or behavior — like, say, carrying an Andean cloth sack called an “aguayo” over one’s lower back every day — could result in long-term osteoarthritis or musculoskeletal stress to a particular area of the body. 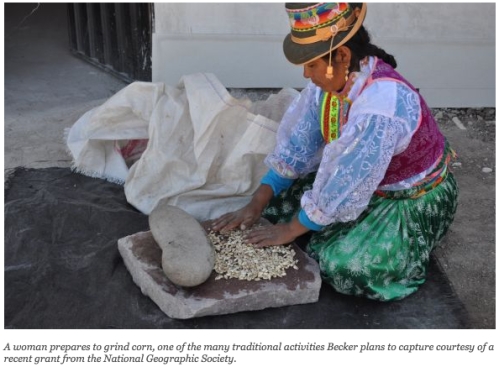 Participants recruited by Becker will don sets of tiny white spheres — think Ping-Pong balls, but smaller — and be captured at work by both a black-and-white film camera and a second camera designed to document the movements of the spheres. The resulting footage will then be loaded into a computer program that models the participants performing the activities and enables Becker to measure differences in the amount of force required to complete each task.

“As far as I know, motion-capture is not something that’s being used elsewhere for similar purposes,” she said. “At the very least, we’re capturing a traditional way of life that’s going away as quinoa’s popularity around the world has grown. Because Bolivia is one of the few countries where you can grow it in abundance, in places where people once hand-farmed fields and traded labor with each other, they’ve been increasingly replaced by tractors and large-scale agriculture.”

Beloved for its high nutrient content, quinoa has been grown as a staple crop in Bolivia, Peru, and Ecuador for thousands of years. Bolivia’s capital city of La Paz, where Becker intends to conduct much of her research, is located roughly 300 miles north of Salinas de Garci Mendoza, the country’s largest producer of the so-called superfood, although its cultivation is widespread.

With preservation in mind, Becker noted her research project will also include an ethnographic component. In particular, she hopes to partner with local cultural anthropologists who are able to conduct interviews with Aymara elders in their native language — people who might remember “what life was like in their region 50, 60, 70 years ago,” she explained.

Still, despite the focus on tradition, Becker remains quick to emphasize the technological advancements that have made her motion-capture research possible, as well as the cultural touchstones and forward-thinking people who first led her to it.

“I’m of the age when ‘The Matrix’ came out, and I had never seen anything like it,” she recalled. “I had thought about doing a project like this since the 1990s, but it wasn’t until I talked to a lot of my close friends who are video gamers and work in the video-game industry that we confirmed it could even be possible. It also helps that the prices of motion-capture technology have come down so much over the years that we’re able to finally make this more of a reality.”

Becker’s project, “Motion Capture Computer Modeling Ancient Labor Practices in Bolivia and Peru,” is made possible by a $46,958 grant from the National Geographic Society’s Committee for Research and Exploration.