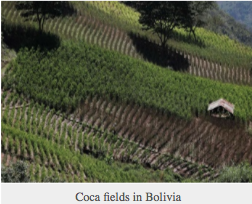 A United Nations monitoring program reported a rise in coca cultivation in Bolivia in 2016 after five successive years of decline, but this reversal in past trends could be short-lived.

Overall coca cultivation in Bolivia grew by 14 percent, from 20,200 hectares in 2015 to 23,100 hectares in 2016, according to an annual report from the monitoring program of the United Nations Office on Drugs and Crime (UNODC) presented on July 19.

The increase comes after five years of successive drops in estimated coca cultivation area. The 2016 figure remains nonetheless substantially lower than those from 2006 to 2011, when the country began implementing alternative coca control strategies.

Meanwhile, the number of hectares of coca eradicated dropped from more than 11,000 in 2015 to approximately 6,500 in 2016, according to the Bolivian National Directorate of Development for Coca Growing Areas (Dirección General de Desarrollo Integral de las Regiones Productoras de Coca – DIGPROCOCA). This figure is the lowest since 2009. 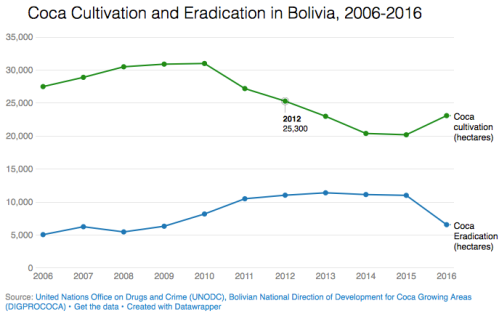 Based on these figures and estimates of yield per hectare in different areas, the UNODC believes that Bolivia produced 38,000 metric tons of coca leaf last year, which represents a 17 percent increase in comparison to 2015.

For the time being, Bolivia appears to have joined its Andean coca-producing counterparts, Colombia and Peru, in a trend of growing coca cultivation. Indeed, Peruvian authorities confirmed to InSight Crime in March that the country’s coca cultivation grew in 2016 for the first time since 2011, while both the UNODC and US estimates suggest that Colombia grew record amounts of coca last year.

A first possible explanation for Bolivia‘s increase is the steep drop in eradication reported by the DIGPROCOCA. Kathryn Ledebur, the executive director of the Andean Information Network (AIN) who closely follows coca-related topics in Bolivia, told InSight Crime by email that while “it is hard to establish direct causality, part of the issue was a very late rainy season that impeded eradication and ‘rationalization’ (reduction with cooperation from farmers), and another is the lack of cooperation of some growers in the La Paz traditional zone.”

In addition, Ledebur pointed to an expansion in the area monitored. Indeed, 180 hectares of coca were discovered in areas that had previously gone unchecked, but the report does specify that the vast majority of increased cultivated coca fields were in areas traditionally monitored by the program.

Authorities justified this measure by asserting that the estimated subsequent production of 30,000 metric tons of coca leaf was necessary to respond to the domestic consumption demand and exportation to regional countries such as Ecuador and Argentina, according to Reuters. Still, as InSight Crime noted at the time, a 2013 government study estimated the country’s legal consumption need for coca could be satisfied by slightly under 15,000 hectares.

Ledebur predicted that Bolivia‘s increasing cultivation trend would not last, arguing that the US cocaine market did not appear to be expanding at such a rate as to sustain the Andean regional coca production boom, and pointed to Colombia’s competitiveness on the illegal coca market.

“The coca crop in Colombia is more than six times larger than in Bolivia, and several Colombian regions have significantly more coca than the Bolivian total,” she told InSight Crime. “With very low prices in Colombia for the leaf — 8 times less — my guess is that production will decrease.”

Bolivian Thoughts opinion: Bolivian unions are extremely vertical in nature, as such, the coca grower caudillo who acts as Bolivian president for the last eleven years, has done everything to please the coca growers who produce mostly for cocaine production.

So, nothing can happen in Bolivia that he doesn’t know or authorize. He has absolute control of ALL State powers, jeopardizing democracy.

His relentless incursion inside indigenous land and National Parks have no other purpose to give away land for coca cultivation. Bolivia is turning into Somalia …