The Best Restaurants in Bolivia You Need to Try 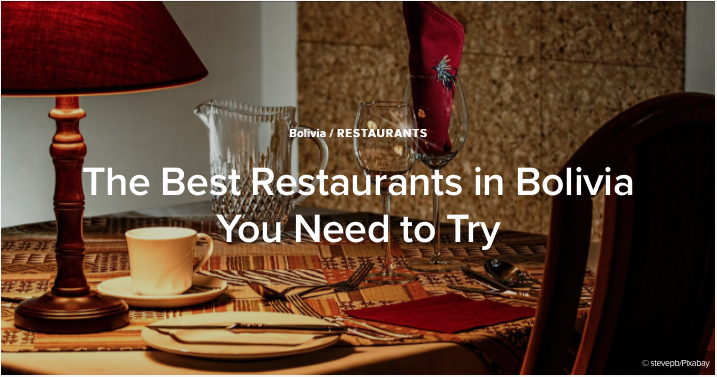 Although it’s not quite internationally famous for its culinary scene, Bolivia is making tangible progress towards becoming a foodie-friendly destination. Years of sustained economic growth and a spike in interest from high-end foreign tourists have seen an array of world-class restaurants pop up around the country. Let’s take a look at the best of the best from every corner of the nation.

Meaning flavor in Quechua, Gustu offers exactly that. After opening in 2012 to rave reviews from renowned publications such as the New York Times and the Guardian, Gustu has become the undisputed king of Bolivia’s fine dining scene. The brainchild of Claus Meyer (of Noma fame), Gustu prides itself on serving locally-sourced ingredients, while adding a creative twist to traditional Bolivian fare. More than just a restaurant, sister NGO the Melting Pot seeks out promising young stars from disadvantaged backgrounds in El Alto and trains them up to work in the restaurant. Although expensive for Bolivia at 410 BOB (US$60) for a degustation menu, you won’t find better gourmet cuisine anywhere in the country. Still not convinced? Gustu was ranked number 14 in Latin America’s Top 50 Restaurants, the only entry from Bolivia, and head chef Kamilla Seidler received the honor of being declared Latin America’s Best Female Chef.

Considering Tarija is so close to Argentina, it’s no surprise the city whips up the juiciest asado (BBQ meat) in the country. The best of the best can be found at El Fogón del Gringo, where delectable Argentine meat is served alongside a first-rate salad bar. Some of the steaks are as big as 14oz (400g), so be sure to order a bottle of the superb local wine to help wash it down.

Run by a friendly Dutch expat in the peaceful, subtropical town of Coroico, Carla’s is a topnotch resto-pub and tourist hangout. As the name suggests, this delightful spot just down the stairs from the main plaza is focused around a lush garden, complete with hammocks and stunning views of the valley below. The menu offers a great selection of tasty European and Bolivian dishes, and excellent machine-made coffee. During the evenings, it’s the best place in town to suck down a few cold ones and meet some other travelers.

Most tourists get out of Uyuni as quickly as possible after their salt flats tours, avoiding an overnight stay at all costs. But there is at least one good reason to stick around – the chance to eat a truly revolutionary pizza. Located inside Toñito Hotel and run by a long-term expat from Boston and his Bolivian wife, Minuteman serves up some of the best pizza in South America. Creative toppings like spicy llama and pesto adorn wonderfully doughy bases which can even be ordered gluten free. As Bolivia’s most longstanding tourist-orientated pizzeria, Minuteman is a must in Uyuni.

Easily the most casual eatery on the list, La Cocina is more of a Friday-night-takeaway than a silver-service-fine dining kind of place. Run by a young Turkish dude, La Cocina serves up amazingly tasty snacks such as hamburgers, quesadillas, falafels and shawarma, with optional deliciously crispy fries that come in three different flavors. The major selling point here is that the staff make all their own bread every day, which happens to be among the best dough in the country. Scoring an amazing dinner for under 30 BOB (US$3.80) makes La Cocina Samaipata’s number one in our book.

Offering up exquisite French cuisine in a romantic though unpretentious setting, La Taverna is the best bet for a fine evening meal in white city. Although there is a wide selection of dishes to choose from, the steaks are the specialty here, cooked to perfection and accompanied with a creative range of garnishes and sauces. Given it is a French restaurant, an extensive wine list is par for the course. 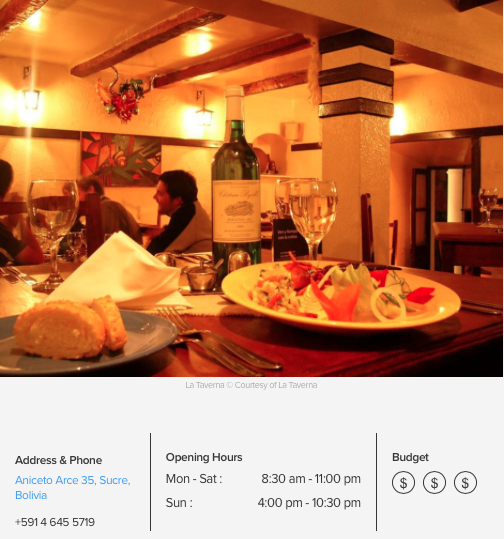 Tucked away behind a forest on a hill above Yumani is the island’s best restaurant. Las Velas (“the candles”) is run by an internationally trained Bolivian native who cooks up a superb selection of pizzas and pastas as well as the local specialty, grilled trout. There is no electricity connected to his remote little restaurant, so candles are used to light the room instead, which is just as well, as this creates an intimate atmosphere for travelers to get to know each other over a game of cards and a few bottles of red. But be warned that the food can take up to two hours to arrive (the owners have to cook in the dark), so get there early, order straight away and step outside to watch the sunset from one of the best miradors (viewpoints) on the island. 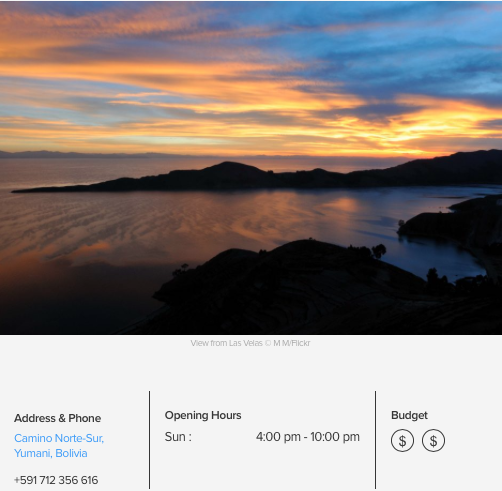 Famous for their legendary fish curry served in a banana leaf, El Nomadico is a must for those visiting the jungle town of Rurrenabaque. Run by a young Australian guy and his Bolivian wife, the restaurant also offers awesome steaks, lasagnas and a variety of Bolivian dishes during their lunch time specials. With a fine selection of cocktails and guaranteed ice-cold beer, it’s a great place to chill out and have a few after coming back from a jungle adventure.

A longstanding Cochabamba institution, La Cantonata has been serving up the city’s best steak, seafood and pasta since 1988. The place epitomizes elegance and old-world charm, featuring white table cloths, attentive waistcoat-wearing waiters and candlelit tables. This cozy and intimate atmosphere makes La Cantonata the place for that special romantic evening. 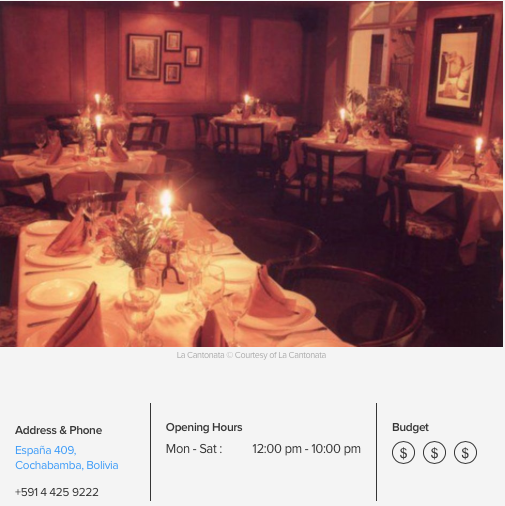 Since opening its doors in May 2016, Sach’a Rest has been turning heads in Santa Cruz for its creative fusion dishes that draw upon Nikkei and Mediterranean influences. Seafood is a big focus here, with ceviche sushi and fish chicharrón among the most popular dishes. With a modern and hip décor that features plenty of funky artwork, it’s fast becoming the top place to be seen for Santa Cruz’ young and wealthy socialites.