Bolivia among the five countries with MORE inflation!

BOLIVIA IS ONE OF THE FIVE COUNTRIES WITH MORE INFLATION

According to FAO report, the price increase implies a impact on welfare of the poorest households, because [the poor] allocate more money to that item. 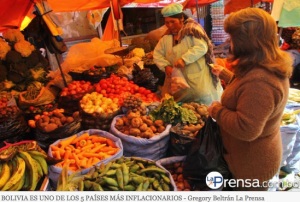 Bolivia started in 2013 among the five countries with the highest inflation rates in the region. According to the quarterly report of the United Nations Food and Agriculture Organization (FAO),” countries like Bolivia (10.4%), Chile (4.9%) , Costa Rica (3.3%), Guatemala (8.8%), Honduras (4.9%) and Paraguay (6.7%) are those where food prices grew more that the year 2012, propitiating the increase in regional food inflation”.

According to the latest report of the Central Bank of Bolivia (BCB), inflation in 2013, ended in 6.48%, was higher than the announced 4.8% goal, which was explained by “supply shocks of three products”: potatoes, tomato and chicken, whose prices rose between August and September.

“Faced with inflationary supply shocks in August and September, the placement of securities is energized and therefore the withdrawal of liquidity and interest rates increased to prevent the inflationary effects of runoff. Likewise, the Executive Body ordered measures to ensure supplies to the domestic market and the fight against speculation.”

While managed to stop the inflationary process, which was developed in the last months of year 2013, the upward trend in some products like lunch, rotisserie chicken and others remained persistently, even until now.

No was only a national theme, according the FAO, inflation of foods in Latin America and the Caribbean closed the year with an annual variation of 10.2%, ie 1.3% percentage points over 2012 inflation, which reached 8.9%,” this situation of higher inflation than the previous year, where food prices are kept on the total economy, implies a significant impact on the welfare of poorest households in the region, because it is they who spend more of their income to food consumption,” it is estimated that in Bolivia the poorest households spend between 60% and 70 % on purchase of staple foods.

The Price increase will be maintained. While Economy Minister, Luis Arce, said earlier this year that inflation had been controlled, the last climatological phenomena made ​ shoot the prices of some products as, for example, beef meat; fruits, like orange, banana and papaya, among the main ones, and vegetables, such as tomatoes, peas, and a disproportionate increase in early February the price of rice, for example, the golden grain, which was sold over Bs400 per quintal.

Similarly, Bolivia reported headline inflation of 6.5 %, higher than the 2012 level.

Poorest. The report takes into account the latest estimates from ECLAC, who claimed that in 2013 there was a decrease in poverty rates in the region, but “the pace of poverty reduction has slowed gradually, and in the case of extreme poverty has even manifested a slight rise.” In the region there are 68 million people in condition of extreme poverty.

The price increase on FOOD WAS ALWAYS ABOVE the GENERAL, EXCEPT TO THE period 2009-2010.