Pope Francis makes clear he is not amused as Evo Morales, Bolivia’s left-wing leader, presents gift that mixes the symbols of Christianity and communism.

Pope Francis has rebuked his host Evo Morales, the Bolivian president, after the left-wing South American leader presented him with a crucifix mounted on a hammer and sickle – the international symbol of the avowedly atheist creed of communism.

The disapproving look on the pontiff’s face made abundantly clear that he was not impressed by the provocative greeting gift handed to him Mr Morales when he paid a courtesy call after arriving in the country.
“That’s not right,” the Pope noted. The slight was all the more notable as the Argentine pontiff praised the social and economic reforms of Mr Morales when he arrived from Ecuador on the second leg of a three-country tour of his native South America. 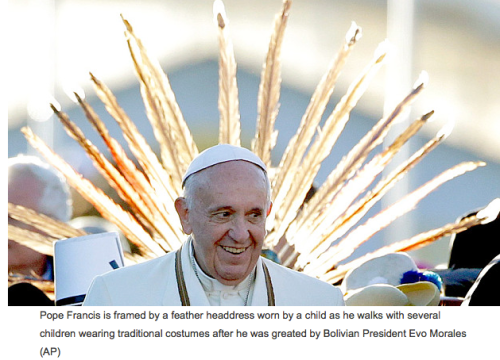 But Bolivian officials explained that the gift was a replica of a crucifix made by Father Luis Espinal, a human-rights activist who was killed by a paramilitary death squad in 1980. The Pope had earlier prayed at the site of the murder of his fellow Jesuit en route to the presidential palace.

On his arrival, Pope Francis stressed the role of the Church in Bolivian society, saying the faith “has continued to shed its light upon society, contributing to the development of the nation and shaping its culture”.

Those words were a clear message to his host. After his election in 2006, Mr Morales, an indigenous Indian, adopted a confrontational approach towards the Roman Catholic Church to which he once referred as his “main enemy”.

He has frequently criticised its role in the colonisation of the continent, ordered the Bible and cross to be removed from the presidential palace and made the country a secular state.

Indeed, all official ceremonies in Bolivia are now preceded by rituals venerating the Andean earth goddess Pachamana. “I remain convinced that we Bolivians have a double religion, double faith,” the president said in January. “We are Catholics, but at the same time we have rituals of our own.”

But his attitude toward the Church changed radically when Francis became pope. He has been keen to cultivate good relations with a religious leader who is widely perceived as a champion of the poor and oppressed and indeed Mr Morales has twice visited him at the Vatican.

The gift ceremony was not his first awkward encounter with a pope. When he met in 2010 with Francis’ predecessor, Benedict XVI, he gave him a letter suggesting the church abolish celibacy and allow women to be priests.