Brazil confirmed to Bolivia that granted asylum to Senator Pinto

The Brazilian Government position reiterated to the Bolivian Foreign Ministry that a safe-conduct be handed in to the Pando Senator, which is necessary to get out of the country. 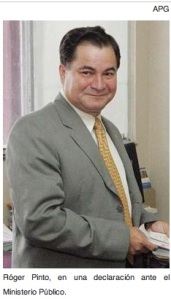 The Embassy of Brazil delivered on Wednesday night, in writing, to the Vice Chancellor Juan Carlos Alurralde the document which confirms that that country granted political asylum to Senator Roger Pinto, who requested protection in this diplomatic legation on May 28.

Vice-Chancellor Alurralde received the document at 19:00 on Wednesday in his Office, said sources from the Ministry of Foreign Affairs of Brazil, from the hands of a Brazilian diplomat, who asked the Government of Bolivia the delivery of the safe-conduct, so Senator Pinto can get out of Bolivia.

Alurralde asked what would happen if this passage were not delivered. The answer was that Pinto would remain indefinitely in the premises of the Embassy of Brazil in La Paz. Also was informed to the Vice-Chancellor that the Brazil Government will wait from Bolivia the report on the granting of asylum and that if it does not happen in a “reasonable time”, it will be the Embassy the entity to do so. Did not reveal how much is that “reasonable time”.

The Bolivian Foreign Ministry was informed several days ago, unofficially, by Brazilian authorities, that the political asylum had been granted and on Wednesday was done in writing at the insistence of Brazilian diplomats to visit Alurralde.

On Wednesday, Pagina Siete reported that Pinto received political asylum and that an aircraft of the Brazilian Government would help the Senator move to Brasilia; the newspaper confirms the validity of this information.

Despite the delivery of documentation by Brazil to the Bolivian authorities, the Minister of communication, Amanda Dávila, contacted Wednesday, around 21:00 hours, with Pagina Siete to deny that the Government had known that information. The call of Dávila occurred two hours after Alurralde received the written documentation.

Pinto requested asylum because he believes that his life is in danger and that the Bolivian judicial system does not give guarantees of fair process. In addition, a Prosecutor issued an arrest warrant for an alleged corruption case that happened in Pando, which would be effective Monday 28, the day that entered the Embassy in La Paz in search of refuge.

Apart from that judgment, Pinto faces about 20 lawsuits with accusations of contempt, libel and corruption, that he should meet in the cities of Cobija, La Paz, Santa Cruz and Sucre.

The source of the Brazil Foreign Ministry who spoke to Pagina Siete pointed out that that country considered “valid” concerns of Pinto about the danger allegedly facing his life and that “there are irregularities” in the judicial proceedings brought against him. A team of lawyers hired by the Embassy’s Brazil analyzed trials against Pinto and detected these “irregularities”.

The Government has criticized the request for asylum of Pinto and pointed out that he seeks protection from investigations into the facts of corruption that he has committed.

Mario Cañipa journalist and political analyst: The decision of Brazil to accept in its facilities Senator Roger Pinto and give him diplomatic asylum shows that suspicions and fears, long been suspected, on the vocation towards authoritarianism of the current Government are correct and valid. That Brazil has considered that Senator should be protected at its Embassy, shows that it is considered as valid complaints that he is being pursued, and that his life is in danger. It is good to note that this is the first time in democracy a citizen received diplomatic asylum to an embassy inside and kept for several days giving him protection. Other Bolivians have obtained refuge or asylum in recent years, but this has not happened in procedures initiated in Bolivia but abroad.

The impact of the image that suffers the Bolivian Government before the asylum granted to the Senator is very strong; as there is a feeling that the Government is authoritarian, Brazil decision confirms that.

And on the asylum granted, what the [Bolivian] Government should do is properly and immediately report what Brazil had been informed, concerning the request for asylum from the Senator. Transparent this situation rather than deny it, an already evident fact, would be the best thing can do the [Bolivian] Chancery.