Bolivian Cacho – Alalay is now available as an app!!!

Cacho, the most popular game for mobile phones in Bolivia

TECHNOLOGY: “Un cacho de cacho” [cacho is the Bolivian name for a game that is played with five dice, and also means as a slang, a moment] is called and is a game for mobile phones and tablets which has over 35,000 downloads in less than a year. It is the most popular in the country in its kind.

The cacho alalay [alalay is a shorter/quicker version of the regular cacho game], one of the most traditional Board Games of Bolivia, has become one of the most downloaded for Android phones and tablets inside and outside the country. “Un cacho de cacho” – name of the game – has made the dice, the leather goblet and its strategies, a bet of the virtual world.

The application was created by Ketanolab, a laboratory for innovation in mobile applications and development of Bolivian software. His young staff created the application that recreates this alalay style game. [I found this link to their Facebook account: click here]

Free download, it is less than a year ago in the platform Google Play; so far it has more 35,000 downloads and is available in Spanish, French, English, Danish and Portuguese. In fact the application adapts to these languages according to the established in the cell, automatically.  [I also found this link to the game in their website: click here, within the original article made by Alejandra Pau, I am inserting some of the pictures of the site, and after the link to the original article, I am placing a final pic with some explanation, directly from the source]

“It came to thinking about which application they would Bolivians like to have on their cell phone. So it occurred to us the idea of making the game of cacho. Both for the users and for those who develop this type of software represented a change, as it should be all for a world of more compact and tactile screens”, says one of the creators, Hardy Beltran.

So far this hobby has shared popularity ratings in pages of applications in Latin America with as famous as Angry Birds games and is also available on Facebook with the name of “juegacacho“.

It is only necessary to have the downloaded version, and in that same style of the alalay, a player or a team, when it’s their turn, shake the phone as if it were the leather goblet and hear the sound of a real one, with the dice inside, before launching the virtual dice a first and second time to then score the points obtained.

From the table to the cellphone

On the “non-virtual” cacho alalay, little is known about their origins. Said was a derivation of other games such as the Generala and poker dice and that emerged and was popularized in Cochabamba, the capital of cacho-Championships, although other versions hold that it arose in Potosi.

It is the inevitable game at the table of those who gather to share moments of leisure and talk, usually accompanied by a beer, chicha [local beverage made out of corn] or a chuflay [made with singani with sodas like Canada-dry or Sprite or Seven-Up, along with some lemon juice and ice cubes].

At these times when enjoyable moments that take advantage to share among friends or relatives are no longer given, however, with the frequency of times of yesteryear. Ketanolab made this application for individual fun.

If you play one, you can overcome your brand in every game through the accumulated score and to participate in teams, they have to use the same cellphone.

So one of the goals is to bring the game anywhere that the user goes to.

However, for the creators, it was a challenge to create rules for a game that, for being so popular and traditional, has many created rules that depend on the circle of family or friends where it is practiced.

“Define the rules for the ‘Un cacho de cacho’ application was complicated. In fact, it continues to generate conflicts in some players who make comments about the game. “This is because that over time we have developed many variations of the same”, says one of the ideologists of the game, Pedro Terán.

And is that for them the cacho alalay rules is like the recipe of the chairo: varies in each of the homes where it is prepared. [chairo is a Bolivian soup]

The application was not created with the purpose of making money, because it has not generated income to put it at the disposal of the users. Its objective was to devise a “very-Bolivian” game that has acceptance and popularity on phones and tablets.

For another of the creators, Paolo Ramos, together with Vinicius da Silva, “Un cacho de cacho” is a way of disseminating their work in game applications.

“We want cacho to be known in some other way, but also its traditional nature transcends borders and is known abroad,” they say.

It is a popular application that has this game with “tricas” [three dice of a kind], “tontos” [two dice of a kind] and “grandes” [five dice alike] to the world of the latest technology, but of virtual goblets and dice. The player practice to then meet again around a table together with friends, to share, although in the real world. 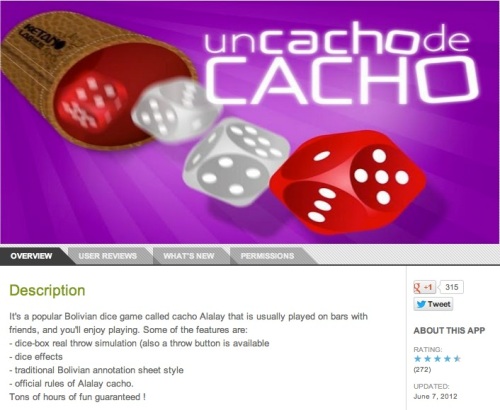