Once upon a time in Bolivia, winning film in London and California, congrats to Patrick Cordova!!

Steadily, Bolivian cinema production is catching up with the rest of the world, our   film makers are not only producing/creating but also winning! Congrats to ALL of them out there!

Cordova debuts successfully with Once Upon a Time in Bolivia

With a budget of only $6,500, the debut of Patrick Córdova triumphed in London and California. Premiering in October in Santa Cruz 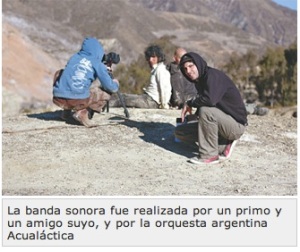 Patrick Córdova had to sell his car to be able to shoot a movie that takes place in the Bolivian roads. Not much time and without much money, was able to conclude Once upon a time in Bolivia, in a job that took him two years.

The film was finally released in April in the London Independent Film Festival, where it won the award for best international film; in California’s Indiefest (USA) he earned a merit award, and also exhibited at the Seattle Film Festival of the north country, not bad for a film that cost only $6,500.

“Once upon a time in Bolivia took to complete, most of all due to the editing process, in which I am very careful and detailed”, said Patrick, who was born in Bolivia but grew up in England, where is his father from; his mother is from Tarija, Rosmery Córdova.

The initial project had Morocco as the location, but the lack of a budget forced Cordova to bring the entire project to Bolivia, even if “all” means a draft of the script and his director of photography, English Daniel Landau.

From the script, said Cordova, he only had the beginning and the end clear, and he already was in the country, to meet the actors who would perform in the film, Luis Caballero, and Miguel Angel Mamani, both with little experience in the cinema, which he was able to develop fully, in accordance with the personality of both actors.

“Everything was done in three months, I got here, I contacted actors, did the rehearsing and we filmed”, Cordova said, and added that the filming process lasted 15 days, of which six of them were to travel to the venues and nine to make the film. “It was a huge job,” said the filmmaker.

The flight, a conflict

The story chronicles the tense relationship between two half-brothers who travel by car from La Paz to the border with Chile. In the Middle, in Bolivia breaks the ‘gas war’, in 2003.

“That is only the context, it is not a political film, I try not to give my opinion on this issue,” said Patrick, ‘what matters in the history is what happens to the protagonists’.

What you see on screen cost $2,000 and $4,500 were for tickets, food, accommodation and payment to the actors. “It is a Bolivian film in every sense”, stated Cordova. The renowned Raúl Beltran and Reynaldo Yujra also contributed their acting experience in the project

Graduated in cinema at the London Film School. Patrick did odd jobs in the Band of brothers HBO series and also in the Spider, by David Cronenberg film.

I’d say Bolivia was fortunate that Patrick didn’t have enough budget, as Morocco was his first choice, glad he thought about his mother’s country! Looking forward to watch this movie!