OAS meeting in Bolivia and threats to political opposition

Is it just naiveté, willingness to impress his political party leaders or what? It is not certain which one may be, however it really shows lack of diplomatic skills, untimely declarations that only hurt our internal and external image as a country. How else could we understand that under democracy we should witness this kind of censorship, let alone threat? El Dia reports:

A member of the MAS threatening opponents

La Paz. The assembly person of the political party in power, Franklin Garvizú will seek guilty parties if the official efforts fail in the OAS Assembly. 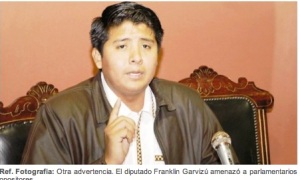 A day after the Governor of La Paz, César Cocarico, warned to hang all the opponents of President Evo Morales, yesterday, official congressperson Franklin Garvizú threatened with processing in the Ethics Commission of the plurinational Legislative Assembly all those parliamentarians that may affect the image of the Government during the making of the OAS Assembly, to be held from June 3rd to the 5th in Cochabamba.

Member Garvizú explained that Bolivia being the headquarters of the OAS General Assembly, politicians should avoid “reckless accusations” contrary to the role that will develop the President Evo Morales and his collaborators.

If no goals are met, [we] will look for guilty parties. “If the objectives of the Government’s strategy with regard to the maritime claim are not achieved, the sole responsibility will be that opposition who will aim at destabilizing the national image and the people will demand explanations,” said the governing parliamentary.

Reaction of the opposition. In this regard, the Chief of party of the National Convergence (CN) alliance, Luis Felipe Dorado, questioned the actions of the ruling party and said that this political force will continue in the role of criticism of government policies.

“If it is not persecution, what is it?.” It is a political and judicial lynching by the ruling party to the opposition. It should be reminded (to Garvizú) the Article 151 of the Constitution where it specifically says that we have inviolability in our opinions. Forcing us and mandates us to make complaints, we will correspond by denouncing human rights [violation] which is political persecution to the OAS,” he thought.

For his part, the Deputy of national convergence, Adrián Oliva, in a press conference, announced that allegations of political persecution to the Assembly of the OAS will be made effective.

La Paz Governor retracts. The Governor of La Paz, César Cocarico, retracted statements issued Wednesday in Viacha, where warned opponents of President Evo Morales to hang them. He said it was a “lapsus linguae” and that as a professional of law [he] must respect democracy. “I am a human being,” he said.

“It was spoken to hang the President, it hurt me enough that they speak about President Evo Morales in this regard, believe that it was not as, on the other hand to go in sense of making a kind of community justice,” added yesterday the Governor, giving explanations of his controversial statements.