Pact to double the sales of almond [castaña] in 8 countries

Pact to double the sales of almond [castaña] in 8 countries 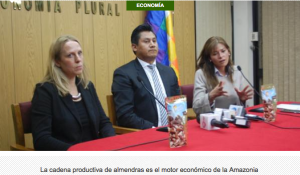 The Empresa Boliviana de Almendras (EBA) and German company Farmer’s Snack made an alliance that aims to double exports in the next almond harvest. Sale estimate of 4 million packages of 200 grams to Germany, Asia, Russia, Australia, Scandinavia, Shanghai, Taiwan and the US. Bolivian almonds are packaged and exported with added value in Riberalta.

The announcement of the business relationship was revealed by the general manager of Sedem, Patricia Ballivian, the manager of EBA Europe, Rolando Haches and Cornelia Ahrens, one of the owners of Farmer’s Snack.

“We are suppliers in the society of almond, they (Farmer’s Snack) packaged in containers where the Amazon is shown, indigenous communities, environmental issues,” Ballivian said while adding that the collection of almonds that economic engine of the Amazon that generates $200 million dollars annually.

“Farmer’s Snack collaborates with companies in background, what I like about EBA is the subject of commitment and social responsibility and have an organic product that protects the environment,” said Cornelia Ahrens, one of the owners of Farmer’s Snack during a visit she made to the plant of the Sena in the Amazon.

Almond, Brazilian nut or castaña are just names for the one and only product that grows in the Bolivian Amazon forest!