For Bolivian entrepreneurs, reversal of mines is a bad sign for investments

Ambivalence in the speech of government officials is damaging our ability to capture foreign capital investment for years to come. At times, current government attends meetings where they invite foreign capitals to come, at other they attack capitalism and do not enforce the law, allowing for violent take overs and anarchy to rule our businesses and economy.

For CEPB, reversal of mines is a bad sign for investments 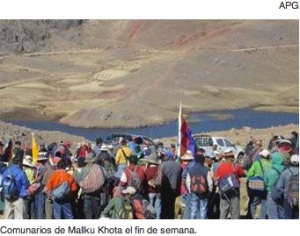 The Confederation of Private Entrepreneurs of Bolivia (CEPB) warned yesterday that the Government puts at risk the development of mining and sends a bad signal to foreign investments to yield to violent pressure and allow the reversal of contracts of concessionaires Colquiri and Mallku Khota.

The President of that body [CEPB], Daniel Sanchez, assured Pagina Siete “we are pointing to the failure of attracting new investment to the mining sector, one of the potential that has Bolivia, when this sector is not taken seriously”.

The representative of the private entrepreneurs also argues that the nationalization of the Colquiri operations and the likely return of Mallku Khota at the hands of the State make “the faith of the State is at stake, in view of the laws written in a good way, they are not only required for legal certainty, they have to adhere to the laws”.

On June 20th, the Government decreed the nationalization of the tin and zinc in Colquiri once cooperators took installations of Sinchi Wayra – subsidiary of the Swiss Glencore — with the requirement of more areas in their favour or otherwise, the reversal.

Over 18 days of confrontation between the cooperative sectors and hired miners, the Government ceded to the former the sites rich in zinc and tin and reversed the rest, to be carried out by the Bolivia Mining Corporation (Comibol).

“The cooperative sector is a predator of the environment, do not pay taxes;” “only worsen the work of all the mining sector and above all it affects the international image of the country to foreign investors,” said Sanchez.

This Sunday, to end with the capture of employees of the company Minera Mallku Khota SA, subsidiary of Canadian South American Silver in Bolivia by herders demanding the expulsion of the firm that carries out exploration in the area, the President Evo Morales proposed to return the deposit to the State if communities reach an agreement to the subject.

“In this case are allowing, as a country, that take-overs, even taking hostages and forcing people to forced labor, impose the possibility of taking private premises”, lamented the head of the private entrepreneurs.

Colquiri, with the signing of a new contract, Glencore would have invest at least $56 million dollars over the next five years, and would also have undertaken exploration works.

The Swiss firm, after the news of the nationalization, reported that it invested nearly $22 million dollars in Colquiri and it will demand a fair return.

For its part, South American Silver had planned an investment of around one billion dollars to extract minerals from a contract which was signed in 2007.

Until the closing of this Edition (19:20 hours, July 9, 2012), the Government still has not issued no communication to the company Minera Mallku Khota, subsidiary of the Canadian in the country, about the possibility of interrupting the contract affecting recently its exploration phase. Due to this situation, the company said that it will not make an statement.

For the CEPB compensation that promises the State do not guarantee security to the resources that are invested in the country.

“For sure, Mallku Khota exploration efforts have an additional cost that we do not know if it will be answered by the Government, will it be paid by the communities?” questioned Sanchez and regretted that there is not a new investment law that allows to know what to do when compensation is required.

More uncertainty and less support to the mining sector at the best possible time due to the favorable international prices on our minerals. What a waste of precious time and neglect to have a sound economic policy.