Was Evo Morales’ removal a military coup? Or democracy trumping authoritarianism? You probably made up your mind before Morales even left the country.

MEXICO CITY — When Evo Morales came to power in Bolivia in 2006, he jetted around the world, meeting leaders everywhere from South Africa to China, wearing the same striped sweater. Copies of it flew off the shelves. Morales became an unlikely style icon and, more importantly, an inspiration to many who followed his rise from poverty as the son of a llama herder to one of the most influential leaders in Latin America.

Fast-forward 13 years, and Morales found himself sneaking out of Bolivia in the dead of night, pleading with other leaders to allow the borrowed plane he was fleeing in to use their airspace. A giant of the left, who only last month seemed set for a controversial fourth term as president, Morales’ fall from grace has been swift, and the wreckage widespread, with violent protests breaking out across the country.

And, as so often with the big names of Latin America — where the word “coup” is supercharged, evoking memories of the regular overthrows of governments beginning in the 1930s and well into the ’70s, particularly of left-wing leaders — how you see what has happened to him is often dependent on your own political ideology. On the left, he’s seen as the victim of a putsch; on the right, his downfall is taken as evidence of democracy trumping authoritarianism on the continent. From Sen. Bernie Sanders referring to Morales’ ouster as a “coup” to the White House praising his resignation as a step forward for democracy in the region, opinions about his escape from Bolivia often have little to do with the facts on the ground, where neither he nor his opposition are the one-dimensional heroes or villains they are regularly portrayed as abroad. [Bolivian Thoughts opinion: Sanders conveniently enough, decides noto to mention OAS’ electoral audit conclusion, that Almagro clearly said: there was a coup d’etat on 10/20/2019 and was made by the government of evo, he also mentioned that running for re election is not a human right as evo claimed …]

Morales’ arrival in Mexico on Tuesday came after he announced his resignation following a controversial election last month that was mired in “irregularities,” including an unexplained hiatus in the vote count that saw Morales emerge as the clear victor.

Morales’ problems date back to 2016, when he lost a referendum that would have made running for a fourth term possible. Having lifted more than half a million Bolivians out of poverty and changed the country’s power dynamics by empowering its indigenous majority since taking office in 2006, Morales wanted to keep hold of power. So, instead of accepting defeat in the referendum, he turned to the constitutional court — stacked with his supporters — which voted that term limits violated his human rights. He ran again in last month’s elections.

After polling booths closed on election night, it seemed the race was tight and a runoff vote would be necessary. But then, the vote count halted inexplicably for nearly 24 hours. When it resumed, Morales had a wide lead. Protests ensued and intensified quickly, especially after the Organization of American States released an audit in which it said it could not validate the results of the election.

Pressure built on Morales. Last week, police in the capital, La Paz, joined anti-government protesters, and several institutions, including the head of the armed forces, “suggested” to him that he consider resigning.

Shortly afterward, Morales did. With demonstrations and looting spreading, he accepted Mexico’s offer of asylum and went into hiding while he awaited the arrival of an official Mexican plane to extract him.

After a nail-biting journey, which included middle-of-the-night appeals to neighboring countries to allow use of their airspace, Morales arrived in Mexico City, where many were quick to point out that the fallen leader’s presidential victory was highly contested. [Bolivian Thoughts opinion: when evo was broadcasting his long-tedious resignation on tv conference, when he was preaching dialogue and peace, at that very moment, his snippers were shooting at buses on the road from Oruro to La Paz, trying to prevent Potosi miners from going to La Paz.]

“Mexico will give asylum to an electoral fraudster who would have to be put in prison without bail if Mexican law were applied to him,” wrote Pascal Beltrán del Río, editorial director for the Mexican newspaper Excelsior, in a column on Tuesday.

Morales, the last member of the “pink tide” of leftist leaders in Latin America during the 1990s and early 2000s, received a warm reception from Mexico’s foreign minister, Marcelo Ebrard, upon arrival. Ebrard — who is the closest cabinet member of Mexico’s left-wing president, Andrés Manuel López Obrador — hugged Morales on the airport tarmac. [Bolivian Thoughts opinion: while Ebrard was bragging about Mexico’s long-standing asylum-granting tradition, he mentioned that people who are granted asylum, cannot engage in politics, nor say anything about their political issues … well, evo has done as he please, ever since he touched Mexican soil, twitting like a madman and giving press conferences, which only exacerbate turmoil and produce panic in Bolivian society.]

Mexico has a long tradition of offering asylum to left-wing exiles, including Soviet revolutionary Leon Trotsky, but some questioned why Morales was quickly granted protection while thousands of other asylum-seekers have been deported in recent months.

But the snap judgments about exactly why Morales ended up in Mexico — was he pushed, or did he jump? — bear little relation to events in Bolivia, where facts are far from certain. At least three people have been killed in street battles and countless buildings have been ransacked since Election Day on Oct. 20, but it’s hard to decipher who exactly is responsible for what.[Bolivian Thoughts opinion: evo likes to brag about a coup, about violence against his supporters … not a single one of his mobsters were  shot. It is masistas’ mercenaries that bring chaos to Bolivian streets. In El Alto, a back pack with almost a million dollars in local currency was seized from Cuban nationals, who are now arrested and charged for paying those violent people.]

In one of the most vivid examples of political violence, protesters assaulted Patricia Arce, the pro-Morales mayor of Vinto, a small town in Bolivia. They cut her hair, covered her in red paint, and forced her to walk barefoot across the village. [Bolivian Thoughts opinion: author fails to record photos and videos that show the people next to her, in older photos as members of her security, her bodyguard walks all the way with her and the woman who cut her hair, is in fact a policewomen of her security detail. Only the socialists of the 21st century are capable of staging  these lies to show the MAS and evo as the saints of all, when in fact they are the ones who distort, create and manipulate information.]

Several news media outlets have been forced to temporarily close down following threats or armed attacks. Morales’ house was attacked, as well as those of several governors, according to local reports. [Bolivian Thoughts opinion: author neglects to report that the house of Waldo Albaracin, former Ombudsman and current UMSA university president , was set on fire by MAS hordes. Another house was looted and burned, owner being a journalist, for exposing MAS lies, Casimira Lema.] 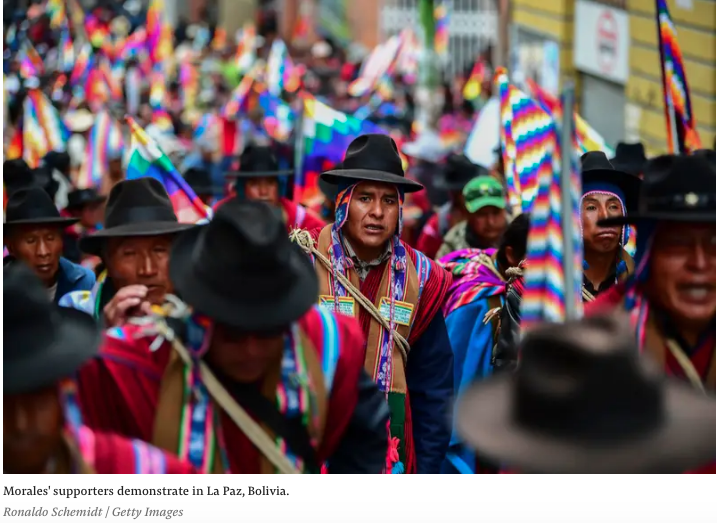 In Cochabamba, a city in central Bolivia, coca growers, some of Morales’ staunchest supporters, are receiving violent threats over WhatsApp, the popular messaging platform. The people making the threats aren’t bothering to conceal their real names, according to Kathryn Ledebur, a political expert in Bolivia and the director of the Andean Information Network, a nonprofit that promotes human rights.

“There’s been a shift to the far right” among the opposition, said Ledebur, adding that the anti-Morales protests have taken “a racist, classist tinge.”

Opposition protesters have been burning the Wiphala flag, which represents the Aymara indigenous nation to which Morales belongs — an important symbol in a region where fair-skinned, European descendants still hold significant power.[Bolivian Thoughts opinion: top civic leader, Luis Fernando Camacho apologized to the indigenous people and said that was a mistake some of us thought that flag belonged to evo’s party and not the indigenous. Later on, videos appeared on one of those burnings to the hands of evo’s hordes … so, Bolivian population have realized that many of the roots of the problem come out of prefabricated lies and issues by Venezuela, Cuba advisors. One of FARC’s lieutenants was also caught and it was revealed that he was promoting riots in Warnes and Montero, closer towns to Santa Cruz city.]

Jeanine Áñez, the highest-ranking remaining member of Bolivia’s government following the resignation of Morales and other top officials, held up a giant Bible after being sworn in as interim president on Tuesday. It was a defiant gesture from the opposition senator. Morales ushered in a new constitution in 2009 that separated church and state, stripping away the Catholic Church’s title as the official religion of Bolivia. [Bolivian Thoughts opinion: author fails to acknowledge that current President belongs to a Christian Church, not the Catholic, although I must say that the absolute population majority in Bolivia worships the Bible, and were uphold when it was removed form the official ceremonies. People being sworn in, did the sign of their religious preferences, until evo came and in theatrical act removed the Bible, so, it is just a way to erase the absolute damaging government, that in 14 years evo has accumulated.]

The country is likely to face more aftershocks from this political earthquake in the near future. Upon his arrival in Mexico, Morales announced that he would remain politically active, opening the possibility that his new home is simply a staging post for a return to Bolivia.

Karla Zabludovsky is the Mexico bureau chief and Latin America correspondent for BuzzFeed News and is based in Mexico City.