Bolivian Thoughts opinion: Over these 13 years, we have involuted under this useless “government.”

evo’s wrongdoings has resulted in serious damage to our wildlife and environment. Chinese came and took over our natural resources, polluting and damaging our environment as we never seem before!

It affects rivers and fauna 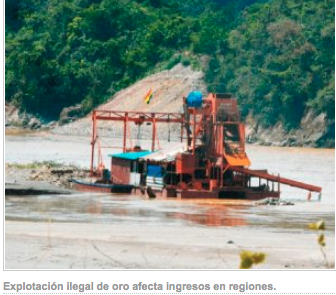 The denunciations of illegal exploitation and contamination in the department of Beni still do not have answers of the national authorities of the sector, meanwhile the unauthorized operators continue damaging the environment, informed Emilio Morosi Paz, president of the Council of Native Peasant Peoples (Codepio) Beni Amazonia

The departmental representative regretted that to date there is no response from the authorities and said that Chinese subjects exploit in illegal areas, and there is no control by state officials.

He recalled that Chinese companies were taken from Cachuela Esperanza, but now they would again be operating near the Orthon and Beni rivers, and there is no authority to carry out the respective control.

Last December, the ANF agency reported that the Navy confiscated Chinese dredges that operated in an irregular manner in Cachuela Esperanza, and in the operation it found 18 citizens of Chinese nationality who exploited gold irregularly, hired by the company Río Dorado, owner of 80 grids for a period of 30 years.

The machinery used to excavate material below the water level did not have the registration certificate issued by the General Directorate of the Harbor Master’s Office, as well as the operating permit issued by the Merchant Marine Unit, documents that allow the authorization to perform activities within the aquatic spaces of the State.

Meanwhile, the cooperative members deny that there are Chinese operators exploiting gold, but that the cooperatives hire their services as well as the machinery to operate on the site.

As will be remembered, the concession is for cooperatives under special conditions, but if they associate with companies or cede their part they have administrative sanctions, such as reversal.

Morosi Paz declared that there is no control in place, meanwhile they wait for the answer, but there is not even a call from the authorities; It presumes that there would be some of these that would be covering up the irregular exploitations of foreign companies.

He denounced that the Chinese not only illegally exploit gold, but also wildlife, and it is an attack on nature. The indiscriminate use of mercury by the dredgers affects the fish, due to the contamination of the water; and they live in insecurity because of threats from foreign subjects.

He clarified that they complain about the zones that are not authorized and do not operate cooperatives, since in these, Chinese companies irregularly exploit gold, and there is no authority to carry out the control.

On the other hand, last May, it was reported that mining royalties for La Paz fell by 22% and the Governorate points to gold marketers, while those of Beni increased due to their production.

According to official data, gold production reached 7 tons in Beni in 2017, 2018 the figure rose to 14 tons, while in the first quarter of 2019 the figure reached 7 tons, and it is estimated that until the end of the year go up to 20.