A number of high-ranking police officials in Bolivia have been arrested for their suspected links to a drug trafficker wanted for years by police in Brazil, but the full extent of their collusion has yet to be revealed.

The announcement came after authorities discovered that Medina and Moreira had allowed suspected drug trafficker Pedro Montenegro Paz — wanted in Brazil since 2015 for trafficking drugs from São Paulo to Europe — to attend two official FELCC events in Santa Cruz while Medina was head of the unit, La Razón reported.

Medina’s stepson, Robin Oscar Justiniano Meruvia — who has also since been arrested on drug trafficking charges, though he denies the allegations — appears in a photo with Montenegro at one such official event. Montenegro allegedly attended alongside departmental and national authorities despite his arrest warrant. 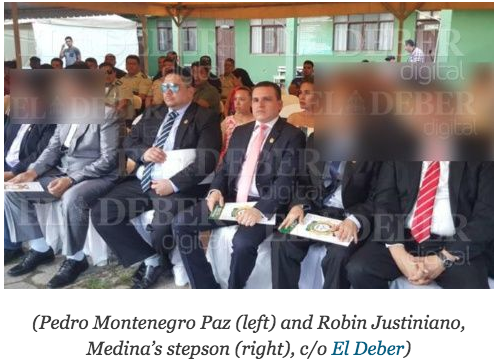 What’s more, Moreira’s wife was allegedly pictured with Montenegro in Cartagena, Colombia, during the Carnaval celebration last year. Montenegro reportedly bankrolled the trip for himself and nearly 20 others, including Medina and Moreira. The expenses surpassed some $19,000 and Montenegro used a fake identification card to travel, according to El Deber.

Members of Interpol’s Bolivia office allegedly deleted data on Montenegro’s arrest warrant from the system. The decision was originally annulled before later being approved by the Supreme Court, according to La Razón.

Since these revelations came to light, the two former policemen have been put in pre-trial detention and a number of other officials have also been arrested. In addition, the entire anti-crime unit in Santa Cruz, made up of some 150 officers, has been suspended so authorities can conduct an audit. Lie detector tests and family vetting will also now become mandatory for police chiefs.

“The General Command of the Bolivian Police will not allow any corruption within their ranks, we prefer to stay with 100 honest policemen. Those who do not share this criterion will logically be sent to the Attorney General’s Office or, where appropriate, to [prison],” said Bolivia Police Chief Yuri Calderón.

Evidence of high-ranking police officials colluding with drug traffickers is not a new dynamic in Bolivia. It is one of the main reasons that the Andean nation has become a key player in the international drug trade, not only for cocaine production, but also as a transit country and a hub for transnational criminal groups.

Indeed, Bolivia’s former anti-narcotics czar, Rene Sanabria, was arrested in Panama in 2011 on charges he and other police officials helped move drug shipments from near the country’s southwest border with Chile to Panama and then onto the United States. In 2015, the country’s former police chief, Oscar Nina, was arrested for suspected illicit enrichment and ties to the drug trade.

It’s unclear what the relationship between the recently arrested officials and the wanted drug trafficker was, but it may be related to the location of Santa Cruz department in a criminally strategic region bordering Brazil to the east and Paraguay to the south.

The department is home to one of the country’s centers for coca production and has in the past been the scene of drug disputes driven by the criminal migration of traffickers from Brazil and Colombia. The low risk of interdiction due to a combination of police corruption and porous borders, among other factors, makes Bolivia an attractive place for the region’s drug traffickers.

Bolivian Thoughts opinion: It is highly disturbing to have a Bolivian president who always claims/brags about been first of all, as the leader of the coca grower’s union in the Chapare, a region where it is proven that over 90% of the coca leaves end up as cocaine …

During his 14 years of absolute control of ALL State powers, narcotrafficking has bloomed, along with a more aggressive smuggling practices and almost absolute anarchy in some borders with neighboring countries. Kidnapping and people trafficking are now part of the daily violence we have to endure. Along with increased violence, narco-style assassinations and loan shark practices in main cities, led by Colombian bikers …

So, anyone may think that evo expelled the DEA, USAID and the US Ambassador for a reason, his populist demagogue hatred against the USA, may have clearly a hidden dark agenda …