Researchers worry that Andean hairy armadillos, poached in Bolivia and largely ignored by conservationists, may be headed toward extinction.

Trudging along to a slow, mournful song, more than a thousand dancers in elaborate costumes fill the streets for the Bolivian Carnival of Oruro. As the procession advances, the dancers twist the wooden handles on their matracas, or rattles, which make a hollow, clattering sound.

Look closer, and you’ll see that the matracas have faces. They’re pointy and belong to an animal that resembles a furry coconut: the Andean hairy armadillo. The creatures are one of the star attractions of the carnival in Oruro, a city in western Bolivia, which takes place every year around Mardi Gras. Their shells are embroidered on costumes, hollowed out and made into rattles, or used as the body of guitars. (When Bolivians hunt the armadillos for use as carnival objects, they catch them alive, then suffocate them so their faces and shells won’t be marred by wounds.)

Participants carry the armadillo rattles in the morenada, a traditional dance that tells the story of African slaves imported in the 1600s to work in Bolivia’s silver mines.

Andean hairy armadillos, unlike other armadillos around the world, live at high altitudes—around 12,000 feet—mostly in the Bolivian Andes but also in Chile, Peru, and Argentina.

Carmen Julia Quiroga Pacheco, a Bolivian Ph.D. candidate in ecology at the University of South-Eastern Norway, has attended the Carnival of Oruro for as long as she can remember. She’s danced in it several times—though her role didn’t require her to carry an armadillo rattle.

As a part of her master’s degree research, Pacheco surveyed 165 Bolivians about their attitude toward the armadillos. Seventy percent of respondents said Andean hairy armadillos—along with the Virgin Mary and the carnival—symbolize the city of Oruro. Several said they “love” the animal, and the former mayor of Oruro, Edgar Bazan, said people from Oruro call themselves quirquinchos (the local name for the armadillos). The armadillo is also the mascot of Oruro’s soccer team.

Local people “just love them,” Pacheco says. “They love them so much that they will just kill them.”

Although experts agree that the armadillos are in decline, it’s unclear how many are left. They’re hard animals to capture and study, says Mariella Superina, an armadillo expert and chair of the Anteater, Sloth and Armadillo Specialist Group for the International Union for Conservation of Nature (IUCN), the global authority on the conservation status of wild animals and plants.

To Pacheco, however, the Andean hairy armadillo’s plight is of great concern. “In less than 30 years, they were basically wiped out from part of the habitat,” she says.

In Bolivia, it’s illegal to hunt or trade Andean hairy armadillos, and in 2015, in an effort to stop poaching, it became illegal to sell or own a new armadillo rattle. Dancers who already owned rattles were allowed to keep them.

Rodrigo Herrera, a legal assessor at the General Directorate of Biodiversity and Protected Areas in Bolivia’s Ministry of Environment and Water, says it’s up to local authorities to enforce this prohibition but that they often turn a blind eye to the problem.

“They have the obligation to do something, but they are doing nothing,” he says. “They don’t care. They are not worried about the importance of conservation, the importance of how quirquinchos’ loss will affect the environment.”

According to José Carlos Perez-Zubieta, a former biology undergraduate and current statistics professor at the University of San Simón, about 130 miles northeast of Oruro, the armadillos’ decline has implications beyond their own well-being. Other animals—snakes, rodents, spiders—rely on their burrows. And the armadillos have a co-dependent relationship with the vegetation in their sandy-soil habitat: Roots of plants anchor the soil, preventing the burrows from caving in, and armadillo dung provides nutrients that help sustain the plants.

Pacheco says Andean hairy armadillos aren’t sold openly in Oruro’s markets anymore, but if you want to buy an armadillo trinket for a few dollars, all you need do is ask around.

Walter Rivera, a lawyer who specializes in biodiversity and professor of environmental law at Central University of Ecuador, says Bolivia’s laws are outdated and that policymakers show little interest in animal conservation. Bolivia’s Congress is discussing two draft regulations to make the Andean hairy armadillo a national heritage animal, but, Rivera wrote in a Skype message, “If those projects were approved, they would not be very useful … There would be no additional protection.”

In 1995, researcher Freddy Cáceres estimated that 2,000 hairy armadillos were killed every year for use in the Carnival of Oruro. Pacheco says that about 15 years ago when she was an undergraduate in biology at the University of San Simón, she began noticing that it was getting hard to see the armadillos in the wild. The number of rattle-carrying dancers keeps growing, she says, adding that land clearing for cultivation of quinoa is also an increasing threat to the animals.

An assessment by the IUCN in 2014 estimated that during the previous decade, the number of Andean hairy armadillos fell by more than 30 percent throughout their range.

In 2006 when Pérez-Zubieta began a field study of the armadillos for his undergraduate thesis, he hoped to catch several to document their size and weight. “But when we went to the field, things were completely different,” he says. “This animal is incredibly elusive.” During the next two years, Perez-Zubieta found traces of the armadillos—tracks and burrows—but he never caught one. In fact, during those two years working in the Oruro area, he saw only two.

The Andean hairy armadillo was first described as a separate species in 1894, based on the skin and fragmented skull of a young adult from the Oruro area housed in the Natural History Museum, in London, England.

More than a century later, scientists have had second thoughts. In 2014, at the 94th annual meeting of the American Society of Mammologists, evolutionary biologist Frédéric Delsuc presented a soon-to-be-published study in which he and six co-authors suggested a change in the Andean hairy armadillo’s taxonomic status.

The study, published in 2015, recommended that, based on analysis of the Andean hairy armadillo’s genetics and skull shape, it wasn’t distinct enough to be considered its own species and should be allied taxonomically with the much more common screaming hairy armadillo. 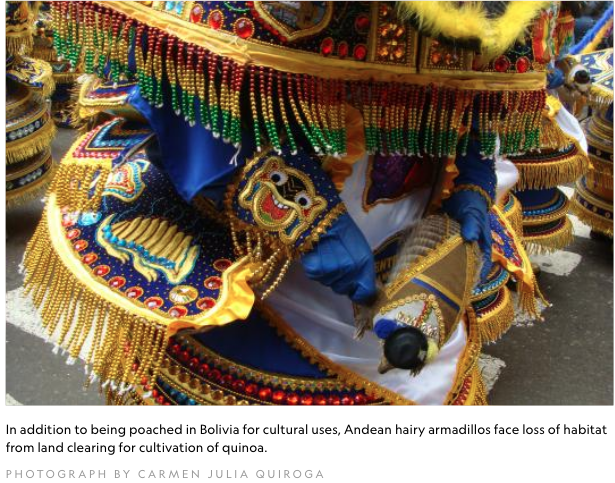 The IUCN acted on the recommendation and removed the Andean hairy armadillo from its “red list” of threatened species. Pacheco and others worry that the IUCN’s new “least concern” listing may have doomed the animal. (For context, raccoons are also listed as of least concern. So are humans.)

The Bolivian government still considers the Andean hairy armadillo to be endangered. But, Pacheco says, once animals are no longer considered threatened by the IUCN, it’s hard for researchers to get funding to study them. It’s why, just a few years after finishing her thesis, she says she’s given up studying the armadillos. She now focuses on large carnivores—the puma, jaguar, the Andean bear—which, she says, have the advantage of being “high profile.”

Gabriela Huayta Sarzuri, an armadillo researcher under Pacheco’s guidance at the University of San Simón, believes that the IUCN’s reclassification puts Andean hairy armadillos at great risk. Their “use is cultural, and knowing that the risk of extinction is less will tend to greater exploitation of the species and will reduce conservation efforts,” she wrote in an email.

Mariella Superina, of the IUCN’s armadillo specialist group, was a co-author of the 2015 taxonomic study. She says the team has been accused of “extinguishing a species.” That’s why, she says, they decided to include a conservation section in the paper. “It was not our intention to, let’s say, to make the Andean hairy armadillo disappear,” she says. “Not at all.”

Along with their argument for reclassifying the species, the researchers issued a warning: Despite the taxonomic change, the Andean hairy armadillo should be protected. They noted that its populations are “steadily declining because of their overexploitation for traditional purposes.”

Delsuc says it’s up to the local Oruro government to protect the animals. “It doesn’t really matter the name of the species you have,” he says. “If you want to still have armadillos in Bolivia, you need to protect the local populations. Even if they are not a distinct species after all.”

This isn’t the first time a study has changed an animal’s species designation: In 2016, one species of giraffe was split into four, and in 2017, one species of silky anteater devolved into seven. But these reclassifications have helped, not hurt, the “new” species, spurring conservation efforts. 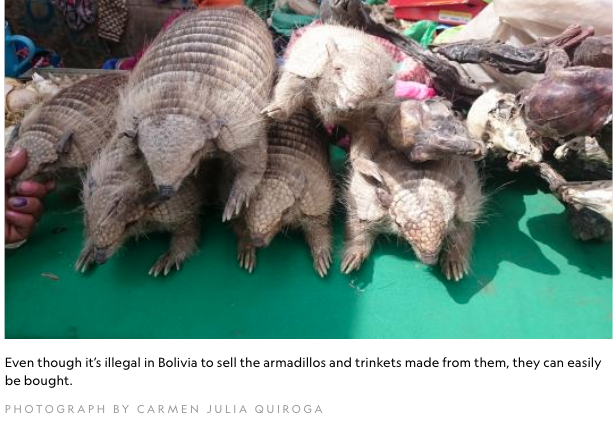 Delsuc acknowledges that people might use the armadillo’s “least concern” status as an excuse for overexploitation. But he says he and his co-authors couldn’t hide their results because they don’t fit with a conservation agenda.

Superina says she’s working with authorities in Chile, where the animals face illegal trafficking, to make sure the armadillos remain protected under the Convention on International Trade in Endangered Species of Wild Fauna and Flora (CITES), the body that regulates global trade in wildlife. CITES, which still recognizes the Andean hairy armadillo as a separate species, prohibits export of the animal or its body parts.

According to Tom De Meulenaer, CITES’s chief of scientific services, the Andean hairy armadillo is—for now—safe from international trade. For 2019, he says, no one has proposed a change to the armadillo’s trade status.

What might the future hold for Andean hairy armadillos? Pacheco says they’re hardy creatures, able to survive cold temperatures in high-altitude habitats—realms most humans want to avoid. In other words, these animals won’t give up easily.