I had the privilege of visiting the Madidi, the Chalalan lodge and walk at 4am in those trails and be enchanted by the wildlife! Hard to reach, remember four hours in a boat after a road trip of over 14 hours, sorting blockades, leaving a powerful 4×4 at the side of the road and on top of a pick-up truck, with glasses and mouth shut in the middle of the night… to avoid swallowing insects or having them hit my eyes… it didn’t matter, I cherish those days inside Madidi…, which certainly belongs to The Hall of Bolivian Fame. It is a heritage we must protect from coca crop invasion and regular agricultural expansion.

Details about this wonderful park were made and published by Wildlife Conservation Society: 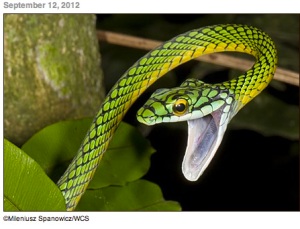 With help from WCS, the Bolivian Park Service released a new compendium documenting the abundant plant and wildlife found within Madidi National Park. The natural haven houses more than 200 mammal species, 11 percent of the world’s birds, and the vibrant parrot snake, photographed as it slithers through the trees.

From snow-capped peaks to lowland tropical forests, Madidi National Park inspires awe. The 7,335 square mile reserve, a portion of the larger Madidi-Tambopata Landscape, lures tourists with its natural beauty, but scientists come to the park for different reasons. For years, they’ve sought to document the terrain’s prolific plant and wildlife.

While attending the IUCN World Conservation Congress in Jeju, Republic of Korea, WCS shared exciting news: the Bolivian Park Service has released a new compendium suggesting that Madidi National Park might be the most biodiverse region in the world.

Even though scientists have only surveyed one third of the park, they’ve proffered groundbreaking findings. Madidi contains: more than 200 species of mammals; 1,868 vertebrates; nearly 300 types of fish; and 12,000 plant varieties. With an estimated 1,088 species, Madidi is thought to possess 11% of the globe’s birds. Only eleven countries contain more avian species than the Bolivian park, and the entire United States houses fewer than 900 bird species.

Madidi’s mammals range from the lowland tapir—an Amazonian herbivore that weighs up to 660 pounds—to the Spix’s disk-winged bat that registers a mere .14 ounces. The harpy eagle, one of the world’s most robust winged predators, preys upon sloths and monkeys inside the bountiful park, also home to 60 species of hummingbird.

Although the newly released compendium emphasizes Bolivia’s fertile terrain, much of the park remains unexplored, and looming threats of climate change to the region make future observations crucial. “This important compendium emphasizes just how poorly known the cloud forests of the Tropical Andes really are,” says Dr. Cristián Samper, President and CEO of WCS, “Apart from their biodiversity and wildlife importance, they are critical from a watershed management perspective and are aesthetically beautiful.”

To learn more about WCS’s work in the Madidi-Tambopata Landscape, click here.