We live under democracy and yet we have to seek political asylum… Senator Roger Pinto was awarded Brazilian protection and that is a compelling evidence that something is really going wrong inside Bolivian democracy. On top of that, the OAS General Assembly ‘advised’ candidly and in a demeaning way that Bolivia needs to seek dialogue with Chile; while Bolivia’s intend was to seek multilateral support and not go back to the bilateral negotiation… another failure of current Bolivian government’s international relations performance.

Yesterday, there was a report saying this was not official, so Pagina Siete by the end of the day, in its website had a shorter article which appears down below.

The following article is the first of two from Pagina Siete [a cartoon from Los Tiempos is further below]:

This is the first case in 30 years of democracy

DATA: the Brazilian Government requested Foreign Affairs Minister Choquehuanca the delivery of the safe-conduct allowing Pinto – refugee since May 29, 2012 – to leave the country. 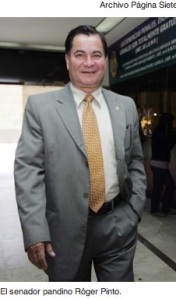 The Brazil Government agreed to grant asylum to the opposition Senator Roger Pinto (CN), which requested protection at the Embassy of that country on May 28th. Sources close to the case yesterday [6/5/12] gave the information to Pagina Siete.

The sources explained that the decision was informed at the Bolivian authorities and Brazil petitioned the Chancellor David Choquehuanca the corresponding safe-conduct to allow the departure of Senator Pinto. Once delivered this document, the opposition politician can be moved to the neighboring country, probably to Brasilia, in an aircraft of the air force of that nation. If the Government does not deliver the above-mentioned safe-conduct, Pinto would stay indefinitely at the Embassy.

This is the first time in democracy that an opposition politician calls, and obtains international requested asylum in Bolivian territory. Since the arrival to power of the MAS, dozens of other leaders have achieved the status of refugees in several countries, but they obtained this guarantee having been abroad.

Sources contacted by Pagina Siete did not want to comment on the fact of whether the acceptance of asylum for Pinto may involve the emergence of similar orders of other opposition leaders or if it implies that Brazil accepts the validity of the Senator complaints against the Government of Evo Morales.

The asylum is a right that people who feel persecuted. Each “receiving” State has the right to accept or reject this request. Pinto is Senator by Pando, from the National Convergence [political] party and has been characterized by its strong criticism of the Government, inter alia concerning the alleged links of authorities with drug trafficking. He also criticized the actions of the Government in the events of El Porvenir, which ended with the death of 13 people.

The main accused by this massacre is the former prefect of Pando Leopoldo Fernández, who is imprisoned in the prison of San Pedro since September 2008, when the events occurred. Fernandez and Pinto, however, claim that the MAS encouraged the clashes. In the letter disclosed to the public after his request for asylum, Pinto accused the Government of being persecuted. “I am in the difficult circumstances of requesting refuge (‘) because I have no other alternative to the harassment and harsh persecution to which I was subjected during this time,” says Pinto letter addressed to the President of Brazil, Dilma Rousseff.

Pinto has 20 legal actions against him, mostly by “contempt” and others for defamation, all initiated at the behest of the ruling party. There are also allegations of corruption. The ruling party criticized harshly the request for asylum of Pinto.

The same Monday 28, Senator of the MAS Fidel Surco rejected that Pinto is “chased by the Government”. The legislator claimed: “Pinto should defend justice and if innocent, sure that will be free”.

The following article is the second of two from Pagina Siete:

Two sources of high credibility reported on asylum for Pinto

RELEASE. Pagina Siete newspaper confirms the validity of the information published today on the request for asylum to opposition Senator Roger Pinto.

Two sources of high credibility to Pagina Siete reported that the Brazil Government granted asylum to opposition Senator Roger Pinto. One of them belongs to the Brazilian Ministry of Foreign Affairs and the other to the opposition politically and both confirmed the information published by the newspaper. [article shown above] Pagina Siete confirms the validity of that information by the credibility that deserve our sources.

A third source contacted Pagina Siete pointed out that Brazil Government will not inform officially on this issue unless the Bolivian Foreign Ministry will not agree on the conditions of delivery of the safe-conduct for Senator Pinto.

That source also pointed out that the Bolivian Government exerts pressures to the Embassy of Brazil in Bolivia so that the decision be overturned. On the other hand, also reported us that government [Bolivian] contacts have went to Senator Pinto himself, who would have been offered that trials against him will be deactivated in return that he withdraws his demand for shelter [asylum].

If the current situation of the information were to change, Pagina Siete will report it immediately.

The newspaper has taken into account the interview at a local radio station of an officer from the Press Office of the Brazilian Ministry of Foreign Affairs. This quote that stated: “it is not official yet, I do not have this information here in the Press Office of the Foreign Ministry, so I will not confirm this information that the Government of Brazil would have given refuge to Mr Senator Roger Pinto”. That version does not deny the information Pagina Siete provided, but it pointed out that is “still not official”. (NdD) 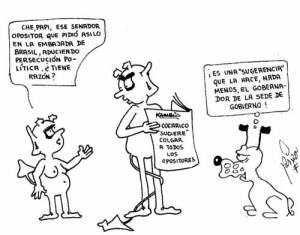 kid: “hey Dad, that senator from the opposition that asked for asylum to the Brazilian Embassy, claiming political persecution, is he right?”

newspaper: “Cocarico suggest to hung all opponents” [Cocarico is the MAS Governor for La Paz]

dog: “is a suggestion made by no other than the Governor of the seat of Government” [referring to the newspaper]